Apprenticed to a Himalayan Master: A Yogi's Autobiography (Paperback) 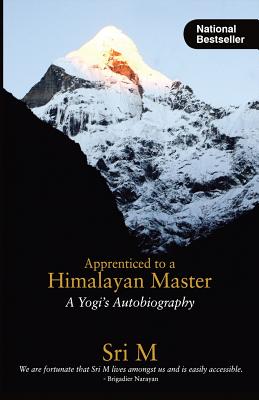 The author Sri 'M' is an extraordinary individual. His uniqueness lies not only in the fact that at the young age of 19 and a half, he travelled to snow clad Himalayas from Kerala, and there he met and lived for several years with a 'real-time' yogi, Babaji, but also that he should undertake such an unusual and adventurous exploration, given his non-Hindu birth and antecedents.

The metamorphosis of Mumtaz Ali Khan into Sri 'M', a yogi with profound knowledge of the Upanishads and deep personal insights, born of first hand experiences with higher levels of consciousness is indeed a fascinating story.

Sri M was born in Tiruvananthapuram, Kerala. At the age of nineteen and a half, attracted by a strange and irresistible urge to go to the Himalayas, he left home.

At the Vyasa Cave, beyond the Himalayan shrine of Badrinath, he met his Master and lived with him for three and a half years, wandering freely, the length and breadth of the snow clad Himalayan region. What he learnt from his Master Maheshwarnath Babaji, transformed his consciousness totally.

Back in the plains, he, as instructed by his Master, lived a normal life, working for a living, fulfilling his social commitments and at the same time preparing himself to teach all that he had learnt and experienced. At a signal from his Master he entered the teaching phase of his life. Today, he travels all over the world to share his experiences and knowledge.

Equally at home in the religious teachings of most major religions, Sri M, born as Mumtaz Ali Khan, often says "Go to the core. Theories are of no use"

Sri M is married and has two children. He leads a simple life - teaching and heading the Satsang Foundation, a charitable concern promoting excellence in education. At present he lives in Madanapalle, Andhra Pradesh, just three hours from Bangalore.