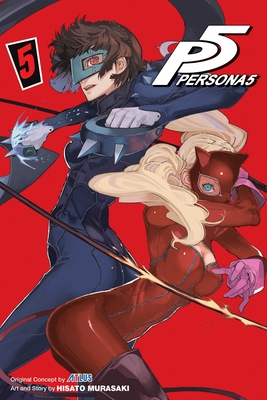 By Hisato Murasaki, Atlas (From an idea by)
$9.99
OUT OF STOCK - Available To Order

This is book number 5 in the Persona 5 series.

After being arrested and having to transfer to a new high school in Tokyo, Akira Kurusu is given the goal of rehabilitation and awakened to a new power—the power of one’s true self, a Persona. Using his Persona and the mysterious navigation app Mementos, Akira and his friends take on the role of Phantom Thieves, saving people from the twisted desires of those around them.

First, the Phantom Thieves reformed twisted schoolteacher Suguru Kamoshida. Next, they succeeded in changing the heart of their second target, the master artist Ichiryusai Madarame. But back in the real world, Shujin Academy student council president Makoto Nijima is starting to suspect that Akira and his friends may be more than just average students. Meanwhile, a criminal organization operating in Shibuya has started to target high school students in a new, devious scam. Will the Phantom Thieves be able to prove they’re the good guys while keeping their identities a secret?!