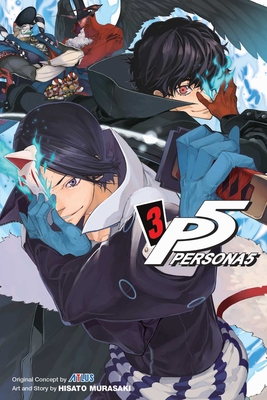 By Hisato Murasaki, Atlas (From an idea by)
$9.99
OUT OF STOCK - Available To Order

This is book number 3 in the Persona 5 series.

After being arrested and having to transfer to a new high school in Tokyo, Akira Kurusu is given the goal of rehabilitation and awakened to a new power—the power of one’s true self, a Persona. Using his Persona and the mysterious navigation app Mementos, Akira and his friends take on the role of phantom thieves, saving people from the twisted desires of those around them.

After successfully changing Kamoshida's heart, Akira and his friends decide to continue operating as the Phantom Thieves. Not long after, they meet famous Japanese artist Ichiryusai Madarame and his student Yusuke Kitagawa. The Phantom Thieves hear rumors that Madarame might be up to some shady stuff. Ann accepts Yusuke's request to model for him in the hopes that she can get some information out of him, but Yusuke refuses to hear it! Will the Phantom Thieves be able to expose Madarame's crimes? And what is the startling truth about Yusuke's past?