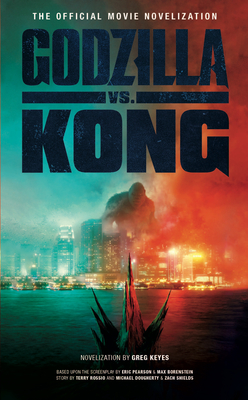 The official novelization of the biggest battle in movie history Godzilla vs Kong, the latest film in the MonsterverseTM franchise, starring Alexander Skarsgard, Millie Bobby Brown, Rebecca Hall, Kyle Chandler and Zhang Ziyi.
ONE WILL FALL The next epic Monsterverse chapter sees legends collide as Godzilla and Kong, the two most powerful forces of nature, clash in a spectacular battle for the ages. As a squadron embarks on a perilous mission into fantastic uncharted terrain, unearthing clues to the Titans' very origins and mankind's survival, a conspiracy threatens to wipe the creatures, both good and bad, from the face of the earth forever. New York Times bestseller Greg Keyes returns once again to the Monsterverse and takes readers deeper into the worlds of Monarch, the Titans, and so much more.

Exposed at an early age to cultures and stories of the Native Southwest, New York Times bestselling author Greg Keyes has written novels in some of the top pop culture worlds, including Star Wars, Interstellar, Planet of the Apes, The Elder Scrolls, and Godzilla: King of the Monsters. His acclaimed original fantasy novels include The Waterborn, the Kingdoms of Thorn and Bone tetralogy, and the ground-breaking Age of Unreason series.