The Arrogance of Power (Paperback) 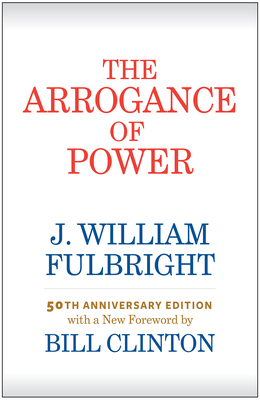 “Fulbright was erudite and eloquent in all the books he wrote, but this one is his masterpiece. Within its pages lie his now historic remonstrations against a great nation’s overreach, his powerful argument for dissent, and his thoughtful propositions for a new way forward . . . lessons and cautions that resonate just as strongly today.”
—From the foreword by Bill Clinton

J. William Fulbright (1905–1995), a Rhodes scholar and lawyer, began his long career in public service when he was elected to serve Arkansas’s Third District in Congress in 1942. He quickly became a prominent member of the House Foreign Affairs Committee, where he introduced the Fulbright Resolution calling for participation in an organization that became the United Nations. Elected to the Senate in 1944, he promoted the passage of legislation establishing the Fulbright exchange program, and he served as chairman of the Senate Foreign Relations Committee from 1959 to 1974, longer than any senator in American history.

Fulbright drew on his extensive experience in international relations to write The Arrogance of Power, a sweeping critique of American foreign policy, in particular the justification for the Vietnam War, Congress’s failure to set limits on it, and the impulses that gave rise to it. This book—with its solid underpinning the idea that “the most valuable public servant, like the true patriot, is one who gives a higher loyalty to his country’s ideals than to its current policy,”—was published in 1966 and sold four hundred thousand copies. The book remains “an invaluable antidote to the official rhetoric of government,” as the New York Times called it, fifty years after its first publication.

J. William Fulbright was, at the time he wrote The Arrogance of Power, serving his fourth term in the Senate and was Chairman of the Senate Foreign Relations Committee. Under Fulbright’s leadership the committee conducted extensive inquiries into American policy in Vietnam, America’s relations with China, and America’s relations with North Atlantic allies. The Arrogance of Power is based on ideas Fulbright put forth famously at a series of lectures at Johns Hopkins University in the spring of 1966.