The Selected Works of Jack London, Vol. 18 (of 25): Revolution and Other Essays; The Sea-Wolf (Hardcover) 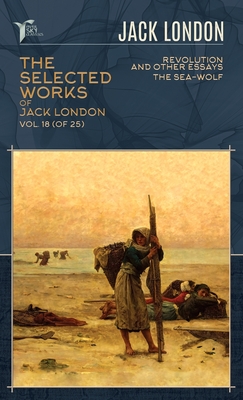 The dignity of dollars

The shrinkage of the planet

The gold hunters of the North

These bones shall rise again

What life means to me.

The Sea-Wolf is a 1904 psychological adventure novel by American writer Jack London. The book's protagonist, Humphrey van Weyden, is a literary critic who is a survivor of an ocean collision and who comes under the dominance of Wolf Larsen, the powerful and amoral sea captain who rescues him. Its first printing of forty thousand copies was immediately sold out before publication on the strength of London's previous The Call of the Wild. Ambrose Bierce wrote, "The great thing-and it is among the greatest of things-is that tremendous creation, Wolf Larsen... the hewing out and setting up of such a figure is enough for a man to do in one lifetime... The love element, with its absurd suppressions, and impossible proprieties, is awful."

The Sea Wolf tells the story of a soft, domesticated protagonist - an intellectual man named Humphrey van Weyden - forced to become tough and self-reliant by exposure to cruelty and brutality. The story starts with him aboard a San Francisco ferry, called Martinez, which collides with another ship in the fog and sinks. He is set adrift in the Bay, eventually being picked up by Wolf Larsen. Larsen is the captain of a seal-hunting schooner, the Ghost. Brutal and cynical, yet also highly intelligent and intellectual (though highly biased in his opinions, as he was self-taught), he rules over his ship and terrorizes the crew with the aid of his exceptionally great physical strength. Van Weyden adequately describes him as an individualist, hedonist, and materialist. Larsen does not believe in the immortality of the soul, he finds no meaning in his life save for survival and pleasure and has come to despise all human life and deny its value. Being interested in someone capable of intellectual disputes, he somewhat takes care of Van Weyden, whom he calls 'Hump', while forcing him to become a cabin boy, do menial work, and learn to fight to protect himself from a brutal crew.

A key event in the story is an attempted mutiny against Wolf Larsen by several members of the crew. The organizers of the mutiny are Leach and Johnson. Johnson had previously been beaten severely by Larsen, and Leach had been punched earlier while being forced to become a boat-puller, motivating the two. The first attempt is by sending Larsen overboard; however, he manages to climb back onto the ship. Searching for his assailant, he ventures into the sleeping quarters, located beneath the main deck, the only exit being a ladder. Several, at least seven men, take part in the mutiny and attack Larsen. Larsen however, demonstrating his inhuman endurance, strength, and conviction, manages to fight his way through the crew, climb the ladder with several men hanging off him, and escape relatively unharmed. Van Weyden is promoted as mate, for the original mate had been murdered. Larsen later gets his vengeance by torturing his crew, and constantly claiming that he is going to murder Leach and Johnson at his earliest convenience, being the hunting season is done, as he can't afford to lose any crew. He later allows them to be lost to the sea when they attempt to flee on a hunting boat.