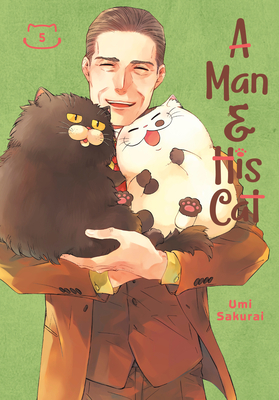 This is book number 5 in the A Man and His Cat series.

Having won hearts and topped charts in Japan, this hotly anticipated series about an older gentleman and his unique, adorable cat is available in English for the first time!

Spying a bedraggled cat outside the window one day, Fukumaru is shocked to realize that the he and the stranger are acquainted from their days in the pet shop! Fukumaru notices that his former compaw-triot is beaten and bruised and tries to get his attention, but the black cat puffs up menacingly and flees. In his anxiety to help his old friend, Fukumaru manages to get out of the house! Will Mr. Kanda's beloved kitty ever find his way home or is he destined for a life on the streets as a stray?!