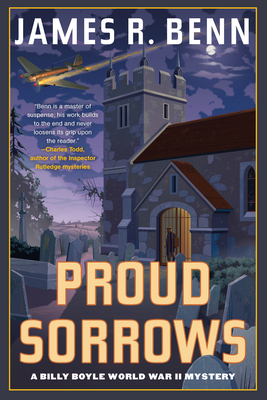 This is book number 18 in the A Billy Boyle WWII Mystery series.

US Army Captain Billy Boyle investigates a murder in a charming English village, where personal vendettas tangle with wartime espionage, in the eighteenth installment in this fan-favorite WWII mystery series.

Norfolk, England, November 1944: After a series of dangerous missions in the South of France, US Army Captain Billy Boyle is finally on leave, and is settling into a peaceful rest at the country estate of Sir Richard Seaton, the father of Billy’s British lover, Diana. Seaton Manor is a comfortable haven, and Billy is eager to spend a few precious days in Diana’s company pretending the war is far away.

Unfortunately, Billy’s leave is cut short when a crashed German bomber resurfaces off the coast with the corpse of a British officer in the pilot seat. The nearby village of Slewford hosts a top-secret military intelligence operation, home to high-ranking German POWs, and so the crash is a matter of national security. Billy is assigned by the commander of the POW facility to investigate. After the plane is discovered, a local villager is murdered—and suddenly what had appeared to be a failed enemy military operation takes on an even more sinister aspect. All Billy’s ex-Boston cop instincts are put to the test as he interviews the grieving, angry, and conniving citizens of this idyllic English country village in search of the truth.

Praise for the Billy Boyle Mysteries

“Billy Boyle has been to some awesome places in James R. Benn’s adventurous World War II series . . . As historical detective series go, this one is extremely well tended by an author who clearly dotes on his hero. As do we.”
—The New York Times

“The painstaking research is evident, the story crackles with life, and the overlay of fictional characters onto very real historical events is seamless.”
—Bookpage