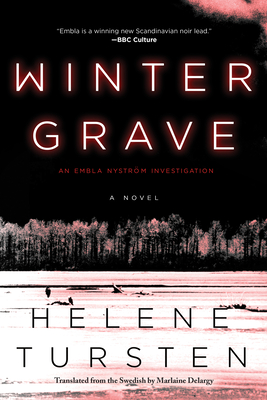 This is book number 2 in the An Embla Nyström Investigation series.

“Winter Grave is the second in Tursten’s new Embla Nyström detective series. Skillfully translated from Swedish, the book gives fans of Scandinavian noir something new to read. Tursten has created a compelling main character and provides some unexpected plot twists. There is enough backstory that the book can stand alone or be enjoyed as part of the series.”
— Ashley Baeckmann, Briars & Brambles Books, Windham, NY

In this thrilling mystery set in rural Sweden, Detective Inspector Embla Nyström must solve a murder case and find two missing children before the small town takes matters into their own hands.

When a little girl disappears a few weeks before Christmas, suspicion falls on the last person she was seen with: the teenage loner who gave her a ride home after school. Complicating the matter is the fact that detectives can hardly get a word out of him. When a second child disappears and a police officer is found dead, tensions in the small town of Strömstad reach an all-time high.

Meanwhile, 28-year-old Detective Inspector Embla Nyström has just returned to work and is still recovering from her recent brush with a killer, which left her unable to get back in the ring to defend her title of Nordic light welterweight champion. As she hunts for the missing children, Embla can’t help but think of the case that has been haunting her for years: the disappearance of her childhood best friend. Could the incidents be linked? With the passing of each dark winter day, the odds of finding the children alive shrink, and desperation mounts. Their parents want answers and will stop at nothing to get them.

Helene Tursten was a nurse and a dentist before she turned to writing. She is the author of the short story collection An Elderly Lady Is Up to No Good as well as the Irene Huss investigations and the Embla Nyström investigations, including Hunting Game and Snowdrift. Her books have been translated into 25 languages and made into a television series. She was born in Gothenburg, Sweden, where she now lives with her husband.

An ABA Indie Next Pick December 2019

“Embla Nyström is back. This time in full force . . . Tursten delivers with an intricate, complex (but not confusing), carefully constructed plot with a long list of victims and a longer list of suspects to go with it . . . a perfect winter read.”
—Mystery Scene Magazine

“An icy blend of everything we love about Scandinavian thrillers . . . Winter Grave will draw you in with its three-dimensional characters and twisting plot—and leave you with the thrilling sense that the universe is a very dark place kept illuminated by people like Embla Nyström.”
—BookBub

“If you’re looking for an alternative to the hard-drinking, self-lacerating, morose detectives who dominate Scandinavian noir, Swedish cop Embla Nyström might be your girl.”
—Air Mail News

"Fans of Nordic noir will sink into this complicated series of linked crimes."
—AudioFile Magazine

“Embla, a sharp-witted detective and titled boxer, inspires confidence that the truth will out, despite the pervasive gloom of Tursten’s Swedish winter . . . a winner for fans of Scandinavian crime fiction and atmospheric British procedurals, like those by Susan Hill, Deborah Crombie, and Reginald Hill.”
—Booklist

“A lethal combination of two missing children, arson, and a policeman’s murder . . . Those looking for Scandinavian crime fiction that’s not entirely bleak will be rewarded.”
—Publishers Weekly

“A series of satisfying twists and turns.”
—Library Journal

“Tursten’s books present the Swedish setting as if it were a character, in rich, active detail. The cultural quirks that make this so interesting for American readers are front and center in the crimes . . . Make room on the bookshelf for more of this intriguing series.”
—New York Journal of Books

“A full, rich portrait of (here) small-town Sweden . . . it is well worth setting aside a few hours to immerse yourself in what is an example of Swedish not-completely-noir.”
—Reviewing the Evidence

“A breathless thriller that’s impossible to put down. I was fascinated by Embla, a credible and complex character who is hiding secrets . . . A great reading experience.”
—Anna Jansson, author of the Maria Wern series

“[An] outstanding series launch . . . Embla is a refreshingly capable lead, whose situational ethics means that she doesn’t feel she must do everything by the book.”
—Publishers Weekly, Starred Review

“[Embla] is a sharp, willful, though emotionally vulnerable detective. Fans of the Huss novels in particular and Nordic noir in general will want to follow this series from its start.”
—Booklist, Starred Review