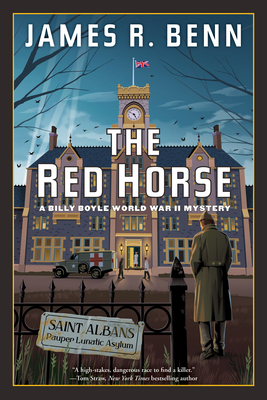 This is book number 15 in the A Billy Boyle WWII Mystery series.

England, 1944: Recovering from physical and psychological wounds sustained in the liberation of Paris, US Army detective Billy Boyle and Lieutenant Kazimierz are sent to a convalescent hospital in the English countryside—only to discover that St. Albans may have its own war secrets, including a killer.

"As historical detective series go, this one is extremely well tended by an author who clearly dotes on his hero. As do we."—The New York Times

Just days after the Liberation of Paris, US Army Detective Billy Boyle and Lieutenant Kazimierz are brought to Saint Albans Convalescent Hospital in the English countryside. Kaz has been diagnosed with a heart condition, and Billy is dealing with emotional exhaustion and his recent methamphetamine abuse. Meanwhile, Billy’s love, Diana Seaton, has been taken to Ravensbrück, the Nazi concentration camp for women, and Kaz’s sister, Angelika, who he recently learned was alive and working with the Polish Underground, has also been captured and transported to the same camp.

This news is brought by British Major Cosgrove, who asks Billy for help, unofficially, in solving what he thinks was the murder of a British agent recuperating at Saint Albans. The convalescent hospital is really a secret installation for those in the world of clandestine warfare to recover from wounds, physical and emotional. Some are allowed to leave; others are deemed security risks and are detained there. When a second body is found, it is evident that a killer is at work in this high-security enclave. Now Billy must carry out his covert investigation while maintaining his tenuous recovery, shielding his actions from suspicious hospital authorities, and dodging the unknown murderer.

James R. Benn is the author of the Billy Boyle World War II mysteries. The debut, Billy Boyle, was a Dilys Award nominee and a Book Sense top-five mystery, A Blind Goddess was longlisted for the IMPAC Dublin Literary Award, The Rest Is Silence was a Barry Award nominee, and The Devouring was a Macavity Award nominee. Benn, a former librarian, splits his time between the Gulf Coast of Florida and Connecticut with his wife, Deborah Mandel.

Praise for The Red Horse

"Billy Boyle has been to some awesome places in James R. Benn’s adventurous World War II series. The U.S. Army detective was even a player at the liberation of Paris, where things went badly wrong for him. The Red Horse, which speaks to the dark side of heroism, finds Billy recuperating from that traumatic ordeal (along with a slight meth habit) at the Saint Albans Pauper Lunatic Asylum, now a convalescent hospital in the English countryside for members of the military . . . As historical detective series go, this one is extremely well tended by an author who clearly dotes on his hero. As do we."
—Marilyn Stasio, The New York Times

"A fond echo of Agatha Christie or Alfred Hitchcock . . . As always, Benn's research into this largely forgotten—or even unknown—aspect of the war is comprehensive and evocatively detailed. And the real-time damage done to all the characters, who are now almost five years into the conflict, establishes the sort of emotional connection and tension for readers that adds to Benn's virtuosity with the mystery template."
—The Day

"As is always the case with Benn’s books, the painstaking research is evident, the story crackles with life, and the overlay of fictional characters onto very real historical events is seamless. If you are new to the series, welcome; there are 14 more to keep you busy after you finish this one."
—BookPage

"This is high octane suspense. What starts in a sanatorium leads to a desperately dangerous race to find a killer . . . chilling echoes of One Flew over the Cuckoo’s Nest and The Prisoner reverberate in every twist and turn of Billy Boyle’s life or death mission . . . With consummate skill, Benn weaves a compelling variation on a locked-room mystery into a detail-rich novel whose high level of tension never lets up."
—Open Letters Review

"What starts in a sanatorium leads to a high-stakes, dangerous race to find a
killer and avert a crisis in the fight against Hitler . . . Chilling echoes of One Flew over the Cuckoo’s Nest and The Prisoner reverberate in every twist and turn of Billy Boyle’s life-or-death mission to unmask a plot in the thick of WWII."
—Tom Straw, seven-time New York Times bestselling author writing as Richard Castle

"Superlative . . . Benn maintains a high level of tension throughout, and his admirable but flawed lead will engage even first-time readers. This fair-play whodunit stands comparison with the best classic mysteries."
—Publishers Weekly, Starred Review

"Once again, Benn draws on little-known aspects of WWII to construct a fascinating wartime thriller . . . Benn skillfully adapts those elements into a compelling variation on a locked-room mystery, delivering another detail-rich novel sure to entrance those who relish deep dives into WWII history."
—Booklist

"Shortly after a medically induced sleep cure has Billy on the road to recovery, two more murders take place in quick succession and he’s in an almost impossible situation; trying to avoid suspicious hospital administrators and figure out who’s the killer, while not falling victim to him and, oh yeah, regaining his own health, in this twisted, suspenseful and surprising WWII mystery that’ll leave readers hunting for all the other novels in this outstanding series.  You won’t be disappointed!"
—Mysterious Book Report

"Well polished, paced with suspense and surprises, and historically trustworthy . . . As [Benn] lays out the war, on multiple fronts, he also lays out the strength of friendship and loyalty. His books are a smooth blend of both facets, and worth every minute of exhilarating reading. You won't need to devour the other Billy Boyle titles before this one, but give yourself the great pleasure of catching up with them afterward."
—Kingdom Books

Praise for When Hell Struck Twelve

“An especially fine example of Benn’s long-running series . . . the emotional journey that is evoked by the talented Benn along the way is strong, vivid, and completely authentic.”
—Mystery Scene Magazine

“Vastly entertaining, decidedly literary . . . Benn writes with a brutal and evocative skill about the grim and bloody reality of a situation and environment reflecting the cumulative cost of war.”
—The Day

“U.S. Army detective Billy Boyle is still one of the coolest characters out there.”
—Suspense Magazine

“I’ve read every book in James R. Benn’s series, reviewed most of them, loved all of them, and this is the best one yet.”
—BookPage, Starred Review