Attack on Titan: Before the Fall 7 (Paperback) 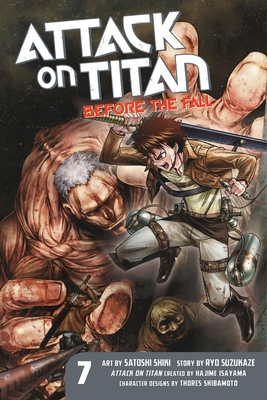 TURNING ON THEIR OWN
The Survey Corps sets a cunning trap to capture the mysterious Abnormal Titan that broke through their ranks. As Arwin tries to determine the grotesque creature’s identity and purpose, scouts report Titans closing in on all sides! But they don’t seem to be after the humans – instead they’re targeting the Titan!

“A clever, well done action series with… enough mystery and world building to leave readers wanting to know more.” – Comics Should Be Good

“I’ve had a blast with Attack on Titan. It’s kept me deeply engaged at all times, has never become predictable or dull and continues to maintain a fantastic level of consistency.” – Drawn Concepts

With his debut series, "Attack on Titan," Hajime Isayama has enjoyed a meteoric rise from unknown to one of Japan's top comics artists.