When Women Ruled the World: Making the Renaissance in Europe (Hardcover) 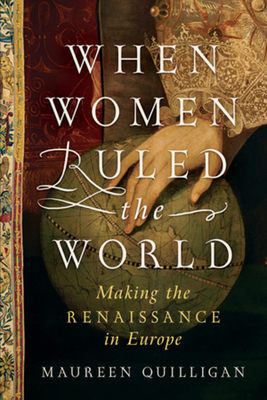 A leading Renaissance scholar shows in this revisionist history how four powerful women redefined the culture of European monarchy in the glorious sixteenth century.

Library Journal • "Books and Authors to Know: Titles to Watch 2021"

Sixteenth-century Europe was a time of destabilization of age-old norms and the waging of religious wars—yet it also witnessed the remarkable flowering of a pacific culture cultivated by a cohort of extraordinary women rulers who sat on Europe’s thrones, most notably Mary Tudor; Elizabeth I; Mary, Queen of Scots; and Catherine de’ Medici.

Recasting the dramatic stories and complex political relationships among these four women rulers, Maureen Quilligan rewrites centuries of scholarship that sought to depict intense personal hatreds among them. Instead, showing how the queens engendered a culture of mutual respect, When Women Ruled the World focuses on the gift-giving by which they aimed to ensure female bonds of friendship and alliance. Detailing the artistic and political creativity that  flourished in the pockets of peace created by these queens, Quilligan’s lavishly illustrated work offers a new perspective on the glory of the Renaissance and the women who helped to create it.

Maureen Quilligan is R. Florence Brinkley Professor of English Emerita at Duke University. The author of books about medieval and Renaissance literature, she was also coeditor of the groundbreaking essay collection Rewriting the Renaissance: The Discourses of Sexual Difference in Early Modern Europe.