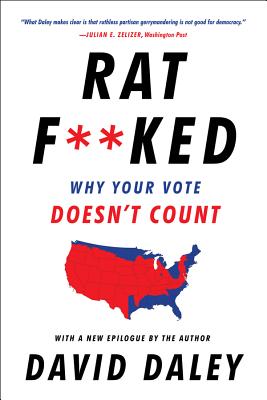 Lauded as a “compelling” (The New Yorker) and “eye-opening tour of a process that many Americans never see” (Washington Post), David Daley’s Ratf**ked documents the effort of Republican legislators and political operatives to hack American democracy through an audacious redistricting plan called REDMAP. Since the revolutionary election of Barack Obama, a group of GOP strategists has devised a way to flood state races with a gold rush of dark money, made possible by Citizens United, in order to completely reshape Congress—and our democracy itself. “Sobering and convincing” (New York Review of Books), Ratf**ked shows how this program has radically altered America’s electoral map and created a firewall in the House, insulating the Republican party and its wealthy donors from popular democracy. While exhausted voters recover from a grueling presidential election, a new Afterword from the author explores the latest intense efforts by both parties, who are already preparing for the next redistricting cycle in 2020.

David Daley is the author of Ratf**ked. His journalism has appeared in the New Yorker, the Atlantic, Slate, the Washington Post, and New York magazine. He is a senior fellow at FairVote, the former editor of Salon, and lives in Massachusetts.