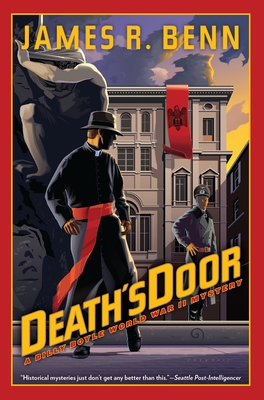 By James R. Benn
Email or call for price.
Special Order - Email or Call for Availability

This is book number 7 in the A Billy Boyle WWII Mystery series.

Will Billy risk everything to save his girlfriend, a British spy, even possibly getting the Vatican involved in the war?

When an American monsignor with high-level political contacts is found murdered at the foot of Death's Door, one of the five entrances to Saint Peter's Basilica, Lieutenant Billy Boyle is put on the case. To solve this murder, Boyle first has to be smuggled into Rome, while avoiding the Gestapo and Allied bombs. Then he must navigate Vatican politics and personalities—some are pro-Allied, others pro-Nazi, and the rest steadfastly neutral—further complicated by the Vatican's tenuous status as neutral territory in German-occupied Rome.

But Boyle's ready to risk it all because of one simple fact: Diane Seaton, his lover and a British spy, has gone missing while undercover in the Vatican. After he discovers that she's being held in the infamous Regina Coeli prison, just a short walk from the Vatican border, Boyle must decide whether he dares attempt a rescue, even though a failed effort would alert the Germans to his mission and risk an open violation of Vatican neutrality.

James R. Benn is the author of the Billy Boyle World War II mysteries. The debut, Billy Boyle, was named one of the top five mysteries of 2006 by Book Sense and was a Dilys Award nominee. Subsequent books have received starred reviews in Publishers Weekly and Library Journal, and been listed as the Bookpage Mystery of the Month. Two have been tagged as a "Killer Book" by the Independent Mystery Booksellers Association. A librarian for many years, Benn lives in Hadlyme, Connecticut, with his wife, Deborah Mandel.

"Benn has obviously done his research.... In addition to series fans, this will appeal to readers who enjoy mysteries and thrillers with a dramatic setting such as the Second World War."—Library Journal