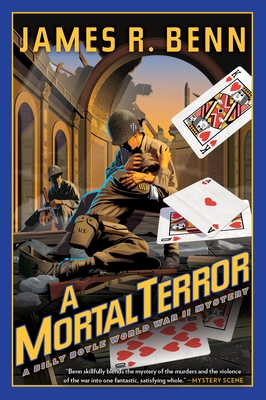 This is book number 6 in the A Billy Boyle WWII Mystery series.

In his sixth investigation, Lieutenant Billy Boyle finds himself in pursuit of a serial killer with a particularly frightening agenda.

1943: US Army Lieutenant Billy Boyle, an ex-cop who serves as detective for General Ike, is sent to Caserta, Italy, to investigate the murders of two American officers stationed there. The MOs are completely different, and it seems like the officers had no connection to each other, but one frightening fact links the murders. Each body was discovered with a single playing card: the lieutenant’s with the ten of hearts; the captain’s, the jack of hearts. The message seems clear—if the murderer isn’t apprehended, the higher ranks will be next. As the invasion at Anzio begins, Billy needs to keep a cool head amidst fear and terror as the killer calculates his next moves.

James R. Benn is the author of the Billy Boyle World War II mysteries. The debut, Billy Boyle, was named one of five top mysteries of 2006 by Book Sense and was a Dilys Award nominee. A Blind Goddess was longlisted for the IMPAC Dublin Literary Award, and The Rest Is Silence was a Barry Award nominee. A librarian for many years, Benn lives in Connecticut with his wife, Deborah Mandel.

Praise for A Mortal Terror

“A fast-paced saga set in a period when the fate of civilization still hangs in the balance."
—The Wall Street Journal

“A thrilling, fast-paced book, a great yarn wonderfully told. The mystery ploy is top notch with the ‘who,’ ‘why,’ and ‘how’ aspects of the murders as puzzling and suspenseful as anyone could wish . . . Author Benn skillfully blends the mystery of the murders and the violence of the war into one fantastic, satisfying whole. If you haven't already been hooked by this series, this book will do it and have you reaching back for the previous five.”
—Mystery Scene


Praise for the Billy Boyle series

"What a great read, full of action, humor and heart."
—Louise Penny