Gahan Wilson's Out There (Paperback) 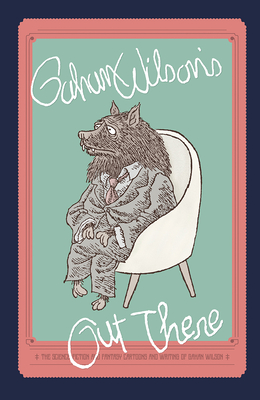 Gahan Wilson is probably best known for his macabre Playboy cartoons—filled with charming monsters, goofy mad scientists, and melting victims—and his cutting-edge work in the National Lampoon, but in 1964, he brought his brilliantly controlled wiggly-but-sophisticated pen line to The Magazine of Fantasy & Science Fiction. Wilson’s freaks and geeks found a home among the stories of the best fantasy and sf writers of the day, offering a welcome, if sometimes macabre or existentially imponderable, graphic break from the magazine’s otherwise straightforward prose. Wilson’s playfully black sense of comedy was on full display in these cartoons, delineated in his trademark roly-poly, sensual, delicately hatched line. Out There features the over 250 cartoons that Wilson drew during his tenure with the magazines as well as all four covers he rendered—none of which have seen the light of day since their first appearance 50 years ago. Wilson also contributed both short stories and movie and book reviews, which are included as well. Out There resurrects hundreds of virtually unseen cartoons by one of the 20th century’s masters of the form.

In his ninth decade as a human being and his sixth as a master cartoonist, Gahan Wilson (born dead in 1930) continues to produce cartoons for a variety of magazines including Playboy and The New Yorker.

Creepy hilarity is Wilson's métier, and his slightly wobbly line is the perfect medium for bringing out the terror and madness in the people and critters he portrays as he shows them confronting the ridiculous and dire eruption of the fancies of popular culture.
— Booklist

Wilson’s misshapen mind’s eye, in which every figure and prop and setting looks like it’s made of the same stuff as those watches by Dalí, has remained unblinking and interested to this day. … Wilson was the antithesis of the one-panel, one-gag cartoonist he appeared to be... Whole dystopian novels detached from their illustrations were sensed in [his] cartoons…
— Adam McGovern - HiLobrow

Gahan Wilson is a master cartoonist with a long and distinguished career and everything he does is of interest. This one looks fun.
— Tom Spurgeon - The Comics Reporter