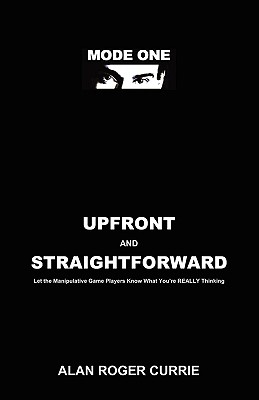 By Alan Roger Currie
Email or call for price.

Upfront and Straightforward is Author Alan Roger Currie's long-awaited follow-up to his popular paperback, Mode One: Let the Women Know What You're REALLY Thinking

In this book, Currie teaches both single men and single women how to quickly and effectively identify when members of the opposite sex are attempting to employ manipulative 'head games' against them.

- What is the difference between a 'Player, ' a 'Serial Monogamist' and a 'Lying Womanizer';
- What the term 'FunClubbing' means;
- When a man is attempting to be a 'weasel';

- The difference between a Reciprocator, a Rejecter, a Pretender and a Timewaster
- Why Rejection is always a 'win / win' proposition
- Why women usually are better at 'head games' than the average man

Currie is an author, radio host and interpersonal communication expert who acts as a personal consultant for many single men and women in the United States and Internationally. Currie has appeared on the popular television talk show, 'The Morning Show with Mike and Juliet' and has also been featured in Essence magazine, one of the best-selling magazines for African-American men and women. Currie is a graduate of Indiana University in Bloomington, Indiana and has conducted a number of classes and workshops on improving interpersonal communication skills between the genders. Currie is single and currently resides in Northwest Indiana.