Like a Lampshade in a Whorehouse: My Life in Comedy (Paperback) 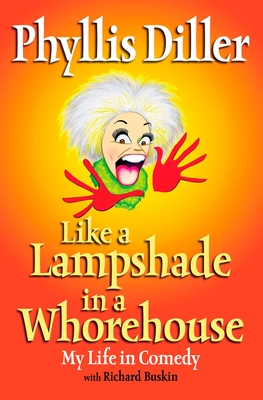 By Phyllis Diller
Email or call for price.
Special Order - Email or Call for Availability

You think I’m overdressed? This is my slip!

No, I’m going to tell you the truth about what I’m wearing.

I used to work as a lampshade in a whorehouse.

I couldn’t get one of the good jobs.
From housewife to humorist, Phyllis Diller made millions laugh for over five decades with her groundbreaking comedy. Boasting unique material, a raucous laugh, wild hair, the trademark cigarette holder, and garish clothes, this pioneer blazed a trail for comediennes during the fifties and sixties, leading them out of small dives into the kinds of top venues that had previously played host only to their male counterparts. While her routine broke new ground and opened doors to subsequent generations of female standups, it also served as a form of self-therapy amid a life steeped in tragedy and turmoil.

Like a Lampshade in a Whorehouse is Phyllis Diller’s own story about the struggle and the pain behind the comedy and the success: her Depression-era adolescence; her marriage to the chronically unemployed husband who inspired her most famous comic character, Fang; her desperate attempts to stave off poverty as a professional comic while raising five children; the disastrous club engagements that coincided with homelessness and separation from her young family; and the problems that clouded her stage and screen success when a second marriage unraveled because of her new spouse’s alcoholism and inner demons.

Over fifty years after Diller’s professional debut as a standup comic, Like a Lampshade in a Whorehouse describes her separate careers as an artist and as a piano soloist with symphony orchestras; her failed attempts to become a Playboy centerfold; and her outspoken attitude toward her extensive plastic surgery that earned her a special award from the American Academy of Cosmetic Surgery. It’s quite a story.

Phyllis Diller, the world’s first and foremost female standup comic, entertained audiences for over half a century with her pioneering, often self-penned material, zany looks, and trademark laugh in countless stage, film, and television appearances.

Richard Buskin is the New York Times-bestselling author of more than a dozen books. His articles have appeared in newspapers such as the New York Post, The Sydney Morning Herald, The Observer, and The Independent. A native of London, he lives in Chicago.