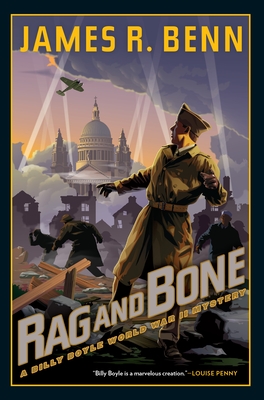 This is book number 5 in the A Billy Boyle WWII Mystery series.

American Lieutenant Billy Boyle is assigned to London by his uncle, General Dwight D. Eisenhower, to investigate the murder of a Russian security officer in the buildup to D-Day. Billy recognizes that this is a politically charged case, pitting Allies against one another, and that he must proceed with caution. The Polish contingent is incensed over evidence that implicates the Russians in the murder of hundreds of Polish prisoners in the so-called Katyn Forest Massacre, and Scotland Yard thinks this murder of a Soviet officer may be a revenge killing—perhaps perpetrated by Billy’s friend Kaz, a Polish baron in exile. But Billy doesn’t buy it. Can he find the real murderer, exonerate his friend, and prevent Allied relations from falling to pieces at this critical moment of the war?

James R. Benn is the author of ten books in the Billy Boyle series: Billy Boyle, The First Wave, Blood Alone, Evil for Evil, Rag and Bone, A Mortal Terror, Death’s Door, A Blind Goddess, The Rest Is Silence, and The White Ghost. A librarian for many years, he lives in Hadlyme, Connecticut, with his wife, Deborah Mandel.

Praise for Rag and Bone

“Billy Boyle is a corker.”
—The Seattle Times

“Stellar . . . Benn excels at depicting the impact of war on London—the bricks from bombed buildings piled neatly on the streets, families living in Tube stations, 'the odor of the Blitz.'” —Publishers Weekly, Starred Review

“Graceful plotting, a strong supporting cast and a modern take on ’40s dialogue all come together to make the Billy Boyle series one of the finest—perhaps the finest—of contemporary period mysteries.”
—BookPage