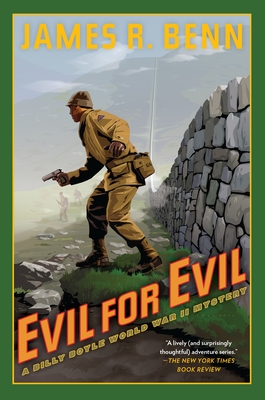 By James R. Benn
Email or call for price.
Hard to Find - Email or Call for Availability

This is book number 4 in the A Billy Boyle WWII Mystery series.

Irish-American Army Lieutenant Detective Billy Boyle returns to his family's homeland only to get sucked into a complex web of wartime intrigue.

Autumn, 1943: Fifty Browning Automatic Rifles and thousands of rounds of ammunition have been stolen from a US Army base in Northern Ireland. A few miles from the depot, the body of a known IRA man has been found with a bullet in the head and a pound note in his hand—the mark of an informer.

Fearing a German-sponsored IRA uprising, General Eisenhower, Billy’s uncle by marriage, sends him to recover the weapons before more damage is done. Billy searched for the missing weapons with the help of a beautiful Irish woman, an officer in British intelligence. Soldiers of the US Army, members of the Royal Ulster Constabulary, as well as of local Protestant societies, and local Catholic laymen all come under suspicion. Bodies begin to accumulate, and Billy finds unexpected challenges to his Boston-Irish upbringing and his own IRA sympathies. There are rogues on both sides, he learns.

James R. Benn is the author of three previous books in the Billy Boyle series: Billy Boyle, The First Wave, and Blood Alone. He is a librarian and lives in Hadlyme, Connecticut.

Praise for Evil for Evil

“Fans of historical mysteries and World War II buffs will savor Evil for Evil . . . Rich in its exploration of Irish history and politics, this is also a character study of brash young man trying to balance personal, family, and political loyalties while staying true to himself.”
—The Boston Globe

“Benn has done a fine job of juggling the pleasures of a whodunit with the much deeper drama of what it was like for young American men to be exposed to the butchery of war.” —Connecticut Post

“This outstanding series effectively blends historical fact—in this case, the Nazi effort to use the Anglo-Irish conflict to their own advantage—with a richly detailed fictional storyline, creating here a riveting mystery that will captivate readers.”
—Mysterious Reviews

Praise for the Billy Boyle series


“A triple dose of excitement with a murder mystery within a spy thriller within a World War Two adventure story. . . . A ‘rattling good read.’”
—Rhys Bowen