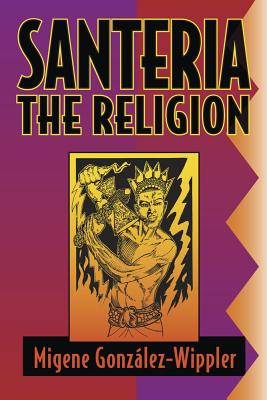 Brought to Cuba as slaves, the Yoruba people of West Africa preserved their religion's heritage by disguising their gods as Catholic saints and worshipping them in secret. The resulting religion is known as Santeria, a blend of primitive magic and Catholicism now practiced by an estimated five million Americans.

Santeria: The Religion is an informative and insightful examination of an African religion's survival in the New World. No one could write this book better than Migene Gonzalez-Wippler. Combining her informed study as an anthropologist and personal experience as a Santerian initiate results in a thrilling book that reveals some of Santeria's most spellbinding elements:

Santeria: The Religion covers every aspect of this religion, including its rites and ceremonies. Some of these ceremonies may be considered bizarre or controversial--but, if you want to know the truth, get this book.

Santeria: The Religion contains over 65 remarkable photographs that will take you right into Santeria traditions. Interviews with practitioners reveal aspects of the religion rarely disclosed to non-believers.

The time has come to reveal the growing spiritual practice that continues to gain ground worldwide, and to remove the fear and distrust from people who do not understand. Here is the truth about the religion.

Migene Gonzalez-Wippler was born in Puerto Rico and has degrees in psychology and anthropology from the University of Puerto Rico and from Colombia University. She has worked as a science editor for the Interscience Division of John Wiley, the American Institute of Physics, and the American Museum of Natural History, and as an English editor for the United Nations in Vienna, where she lived for many years. She is a cultural anthropologist and lectures frequently at universities and other educational institutions.