Changemaker Playbook: The New Physics of Leadership in a World of Explosive Change (Hardcover) 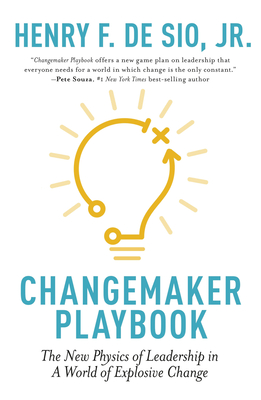 “The game has changed, so how do you respond? Changemaker Playbook offers a new game plan on leaderships that everyone needs for a world in which change is the only constant.”--Pete Souza, #1 New York Times bestselling author

“Changemaker Playbook is filled with stories of everyday changemakers who have the courage to act on their empathy. This book is a true blueprint for how we rise above our differences, come together, and fix real problems.” --Van Jones, CNN political contributor, host of The Van Jones Show, and best-selling author


The Game Has Changed!

What would you do if the game you had been preparing for your whole life had changed?

This is the question we all face today. Our one-leader-at-a-time past has given way to a present reality where everyone has the potential to lead in every aspect of life. We all have at our fingertips the tools of change that were once available to only a few. This shift from one-leader-at-a-time to everyone-leading-in-every-moment has created a changemaker effect on society. Change is no longer linear and faster, it's explosive and omnidirectional—and we are the first generation to navigate this reordered reality.

CHANGEMAKER PLAYBOOK will show you how to thrive in every aspect of today's transformed societal landscape. Based on the author’s discoveries about leading in change from some of the world’s leading changemakers — business and social entrepreneurs, educators, media thought leaders, and youth innovators — readers can apply the principles in this book to the new everyone-a-changemaker world. An unforgettable tutorial on the principles of empathy-based ethics, co-creative teamwork, and the ins and outs of the new game, CHANGEMAKER PLAYBOOK is as much a new leadership handbook as it is the definitive individual and organizational achievement playbook.

This is the new playbook for the new game.

Hon. Henry F. De Sio, Jr., is known as the global ambassador for changemakers. He is an author, keynote speaker, campaign strategist, and leadership advisor. He has served as the executive of both startups and large, complex organizations. As the 2008 Chief Operating Officer (COO) of Barack Obama’s presidential campaign, and then serving as Deputy Assistant to the President in the Obama White House during the first administration, De Sio came to be intimately acquainted with a new emerging pattern of societal change. He has since followed his campaign-driven passion for hope and change to make changemaking a global phenomenon.

De Sio has engaged with the world’s leading social and business entrepreneurs, and he has brought the powerful framework of new leadership and team-of-teams organization described in Changemaker Playbook to board rooms, newsrooms, community forums, university institutions, and governmental halls all over the world. He's helped civic and business leaders, parents and educators, and everyone across the social spectrum to cultivate in themselves and in others the qualities of the changemaker: an innovative mind, a service heart, an entrepreneurial spirit, and a collaborative outlook.

Henry De Sio holds a master’s degree in public administration from Harvard's Kennedy School, and he earned his B.A. in political science from the University of California-Santa Barbara. He currently lives in Arlington, Virginia, with his wife, Sine, and their two young sons.

“Change and disruption define our present and foreseeable business operating climate. Changemaker Playbook offers readers a leadership-paradigm-shifting and thought-provoking way forward to achieving successful business engagement.”
—- Ertharin Cousin, former US Ambassador to the United Nations Agencies for Food and Agriculture, Forbes’ The World's 100 Most Powerful Women, and TIME’s 100 Most Influential People in the World

“Changemaker Playbook is a powerful new leadership framework and organizational model for working in teams of teams, powered by the idea that when we put ourselves in the shoes of those who are struggling or are on the margins—if we can genuinely understand the world from their perspective—then we can take care of business and solve society's most urgent and pressing issues.”
—- Jostein Solheim, former CEO at Ben & Jerry’s and senior business executive at Unilever

“This is the story only Henry De Sio can tell. For more than a decade Henry has been the global ambassador for changemakers, bringing this powerful framework to leaders across sectors all over the world. This is the definitive playbook for the new game of living in complexity, with a clear roadmap for preparing our children to thrive and for lifting each other above the challenges before us.”
—Maja Frankel, secretary-general at Friends: United Against Bullying

“The pace of change in our world is accelerating, and regardless of your profession, you need to adjust your approach to face the challenges of this new terrain. Drawing on his transformative work leading a winning presidential campaign and later, working with remarkable social entrepreneurs across the globe, Henry De Sio shows us how everyday people can come together to do extraordinary things. Changemaker Playbook is the new leadership handbook for today’s world.”
—Chris Lu, political commentator and former Deputy Secretary of Labor

“De Sio reveals the new paradigm of leadership and teams that are operating, now, in front of our eyes. As he states with clarity, spirit, momentum, and affirmation, the new game of everyone a changemaker only requires of us that we abandon the former, hierarchical relationships of the past and build impact and innovation that that taps into everyone’s insight and potential.”
—- Torey Malatia, radio executive and co-creator of the long-running popular radio program This American Life

“In today’s world of rapid change, our systems and institutions must be continuously renewed and reinvented to ensure peace and sustainability. De Sio’s examination of leading and emerging innovators in business, civil society, education, media, and other fields offers both a framework of understanding and invaluable advice to thrive in this world — and change it for the better.”
—- David Bornstein, best-selling author of How to Change the World: Social Entrepreneurs and the Power of New Ideas, New York Times columnist, and founder of Solutions Journalism

“This book confirms all I have seen during my years growing and nurturing a network of thousands of entrepreneurs: that empathy and courage, combined with proximity to urgent challenges, can fuel solutions that address persistent community needs. This book offers the models and stories we need to build an inclusive, flourishing future.”
—- Alfa Demmellash, co-founder and CEO at Rising Tide Capital, co-founder at Future Tide Partners, and World Economic Forum Young Global Leader

“If ever there was a time in which strengthening our communities, supporting fresh leadership approaches, building trust, and taking care of each other were paramount, it’s now. Changemaker Playbook shows us that when everyday people channel our creative energies to issues we are passionate about that affect our lives and then galvanize others who share those passions, we can truly make better communities for everyone.”
—- David Simas, former Assistant to the President in the Obama White House

“Changemaker Playbook is hopeful and bound to inspire. We all need a guiding light. And in this book Henry shows us so many guiding lights. For all of us who strive for the world as it should be, this is a roadmap for how we can make it happen.”
—- Johanna Maska, host of Pod is a Woman and CEO at The Global Situation Room, Inc.

“Henry De Sio understands and unearths an essential truth in his latest book: empowering everyone as a leader is what the modern workforce demands and what solving the big problems of the day requires. This is a must-read for anyone thinking about how to build flourishing teams and leaders.”
—- Eric Waldo, executive director at Michelle Obama's ‘Reach Higher’ initiative

“Because entrepreneurship is an important driver for improving livelihoods, Changemaker Playbook is the case for why every young person must be equipped and supported as a changemaker. Recognizing the power of young changemakers is the way forward for global development.”
—- Per Heggenes, CEO at IKEA Foundation

“As a student leader, ours is the generation that will lead us into the new, complex, ever-changing game. Changemaker Playbook is an essential tool that every student leader needs to read in order to thrive and excel in this elaborate world we live in today.”
—- Anna Counihan, student body president at University of Minnesota Duluth and student leader at the National Campus Leadership Council

“Henry De Sio captures beautifully how technology has democratized leadership, and he provides a compelling framework for unleashing a generation of distributed change agents who can chart a new course for our society . . . from anywhere.  His focus on empathy, agency, and innovating for the good of community will be core to rebuilding the American fabric and provides a key strategy for bridging the rural-urban divide our nation is facing.”
—- Matt Dunne, founder of the Center on Rural Innovation and former Googler

“Changemaker Playbook is the perfect guide for people who want to better their communities and themselves in today’s fast-changing world by fostering empathy, following our creative passions, and solving problems through teamwork.”
—- Mimi Goss, author of What Is Your One Sentence?

“Changemaker Playbook offers a clear picture and a powerful vision for commanding today's world. This is a must read for business and social-sector professionals advancing mission-led organizations.”
—- Christoffer Omberg, CEO and co-founder at Oslo Business Forum

“Audacious visions of BIGness, innovation, and ‘change on steroids’ have crowded my imagination since being exposed to the ideas in this book. In this fast-changing world, today's young people are trying to make sense of the new reality of careers and the economy. Henry gives original language and insights to help us understand a dramatic new world.”
—- Amy Morrill Bijeau, higher education professional at American University

“During the more than four years we worked together—first in the presidential campaign and then in the Obama administration—I was impressed by Henry’s highly successful management philosophy which relied heavily on a collaborative approach and an ability to teach and inspire the people around him. As the Chief Operating Officer (COO) of Obama for America, he was an indispensable member of the management team that built the campaign from a startup in the earliest days into the impressive organization that was the foundation for our candidate’s success. Having worked closely with Henry as he performed in both roles, I rate him as one of the best managers of a large organization I have had the privilege of observing an action.”
—- Peter Rouse, former Counselor to President Barack Obama & Chief White House Aide