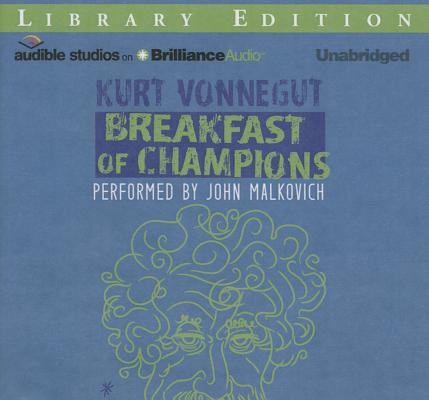 By Kurt Vonnegut, John Malkovich (Read by)
Email or call for price.
Hard to Find - Email or Call for Availability

Breakfast of Champions (1973) provides frantic, scattershot satire and a collage of Vonnegut's obsessions. His recurring cast of characters and American landscape was perhaps the most controversial of his canon; it was felt by many at the time to be a disappointing successor to Slaughterhouse-Five, which had made Vonnegut's literary reputation.

The core of the novel is Kilgore Trout, a familiar character very deliberately modeled on the science fiction writer Theodore Sturgeon (1918-1985), a fact that Vonnegut conceded frequently in interviews and that was based upon his own occasional relationship with Sturgeon. Here Kilgore Trout is an itinerant wandering from one science fiction convention to another; he intersects with the protagonist, Dwayne Hoover (one of Vonnegut's typically boosterish, lost, and stupid mid-American characters), and their intersection is the excuse for the evocation of many others, familiar and unfamiliar, dredged from Vonnegut's gallery. The central issue is concerned with intersecting and apposite views of reality, and much of the narrative is filtered through Trout, who is neither certifiably insane nor a visionary writer but can pass for either depending upon Dwayne Hoover's (and Vonnegut's) view of the situation.

America, when this novel was published, was in the throes of Nixon, Watergate, and the unraveling of our intervention in Vietnam; the nation was beginning to fragment ideologically and geographically, and Vonnegut sought to cram all of this dysfunction (and a goofy, desperate kind of hope, the irrational comfort given through the genre of science fiction) into a sprawling narrative whose sense, if any, is situational, not conceptual. Reviews were polarized; the novel was celebrated for its bizarre aspects and became the basis of a Bruce Willis movie adaptation whose reviews were not nearly so polarized. (Most critics hated it.)