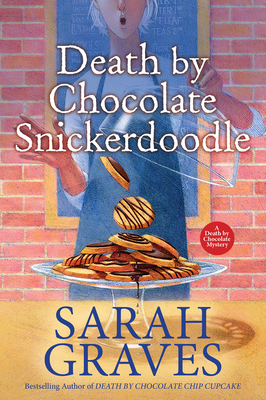 This is book number 4 in the A Death by Chocolate Mystery series.

In the fourth Death by Chocolate Mystery by the bestselling author of the Home Repair is Homicide series, Jacobia “Jake” Tiptree and Ellie White are fired up for Eastport, Maine’s Annual Cookie Baking Contest. But when a cunning killer and a devastating fire threaten to ravage the quaint island town, Jake and Ellie must dip into another homemade homicide investigation before all they love goes up in smoke…

As co-owners of Eastport’s beloved waterfront bakery, the Chocolate Moose, Jake and Ellie know their customers expect them to cream the competition at the town’s annual Cookie Baking Contest. But they’re really just in it for fun, hoping to get Jake’s daughter-in-law baking again. Those plans collapse when fearsome local curmudgeon Alvin Carter is murdered, and every crumb of evidence points to Tiptree family friend—and all-around sweet guy—Billy Breyer.

Billy’s sisters beg Jake and Ellie to prove his innocence. After all, lots of folks had gone sour on Alvin, whose popularity ranked somewhere between a toothache and the plague. But just as the ladies begin sifting through the suspects, a series of grass fires blaze across the island, threatening catastrophe. Now, Jake and Ellie will need all their courage—and an extra dash of that downeast Maine stubbornness—to sniff out the real killer before anyone else gets burned . . .

Sarah Graves is the USA Today bestselling author of the Death by Chocolate Mysteries, the Home Repair is Homicide MysterySeries, and the Lizzie Snow suspense novels. Much like Jake Tiptree, the sleuth who stars in her cozy mysteries, she lives in a200-year-old house in Eastport, Maine. When she’s not cooking or baking something delectable (or writing about it) she tends a huge garden or shovels snow, depending upon the season. She can be found online at facebook.com/SarahGraves2011.

Praise for the Death by Chocolate Mysteries by Sarah Graves

“Graves does a good job keeping readers guessing with multiple potential motives. Fans of cozies with a dark edge will have fun.” —Publishers Weekly on Death by Chocolate Snickerdoodle

“Another surprisingly wild ride of a culinary cozy here in the Death by Chocolate Mystery series. Jake and Ellie’s scrapes are by turns hilarious and exceedingly dangerous...The mystery was well-crafted, with layers that deftly obscured whodunnit.” —Criminal Element on Death by Chocolate Snickerdoodle

“Entertaining…Plenty of suspects and a mysterious sailing ship make for an intriguing puzzle. Cozy fans are sure to have fun.” —Publishers Weekly on Death by Chocolate Frosted Doughnut

“Plenty of appealing elements…The ever-sympathetic main characters, the close relationships Jake has with her multigenerational family, the beautifully described coastal Maine setting, and the baking frame.” —Booklist on Death by Chocolate Frosted Doughnut

“It’s especially nice to get to know all the members of Jake’s large household as they plan together for the future, unaware of the peril that looms over Eastport in the form of the mysterious ship.” —Criminal Element on Death by Chocolate Frosted Donut   “Graves pulls the story together at the end with an exciting scene that identifies the real culprit and brings that individual to justice.” —The New York Journal of Books on Death by Chocolate Frosted Donut

“Graves' second case of chocolate murder offers fans of the genre a trifecta of coziness: plucky heroines, sweet treats, and just enough puzzlement to keep you on your toes.”—Kirkus Reviews on Death by Chocolate Malted Milkshake

“Enjoyable...Lively characters, an intricate plot, and enticing descriptions of Down East Maine make this cozy a winner.” —Publishers Weekly on Death by Chocolate Malted Milkshake

“The story’s suspense, clues, red herrings and action scenes are well worth it. Have somebody taste test that next chocolate milkshake, just in case.” —The Kennebec Journal on Death by Chocolate Malted Milkshake