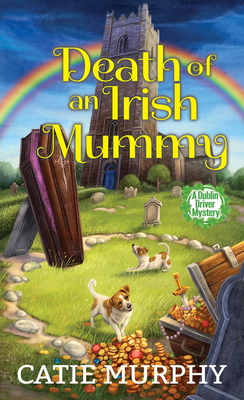 This is book number 3 in the The Dublin Driver Mysteries series.

Squiring a self-proclaimed heiress around Dublin has got limo driver Megan Malone’s Irish up—until she finds the woman dead ...

American-born Cherise Williams believes herself to be heir to an old Irish earldom, and she’s come to Dublin to claim her heritage. Under the circumstances, Megan’s boss Orla at Leprechaun Limos has no qualms about overcharging the brash Texas transplant for their services. Megan chauffeurs Cherise to the ancient St. Michan’s Church, where the woman intends to get a wee little DNA sample from the mummified earls—much to the horror of the priest.

But before she can desecrate the dead, Cherise Williams is murdered—just as her three daughters arrive to also claim their birthright. With rumors of famine-era treasure on the lands owned by the old Williams family and the promise of riches for the heirs, greed seems a likely motive. But when Orla surprisingly becomes the Garda’s prime suspect, Megan attempts to steer the investigation away from her boss and solve the murder with the help of the dashing Detective Bourke. With a killer who’s not wrapped too tight, she’ll need to proceed with caution—or she could go from driving a limo to riding in a hearse...

Catie Murphy, who has written numerous award-winning Fantasy and Sci Fi books under the pseudonym C. E. Murphy, began writing around age six, when she submitted three poems to a school publication. The teacher producing the magazine selected (inevitably) the one she thought was by far the worst, but also told her--a six-year-old kid--to keep writing, which she has. She has also held the usual grab bag of jobs often seen in an authorial biography, including public library volunteer (at ages 9 and 10; it's clear she was doomed to a career involving books), archival assistant, cannery worker, and web designer. Writing books is better. She was born and raised in Alaska, and now lives with her family in her ancestral homeland of Ireland. Visit her at Mizkit.com.