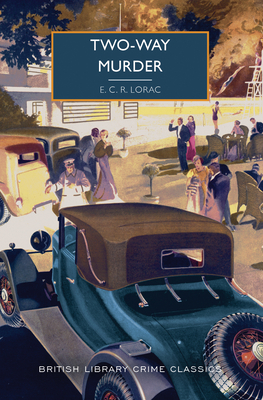 Mystery crime fiction written in the Golden Age of Murder

It is a dark and misty night—isn't it always?—and bachelors Nicholas and Ian are driving to the ball at Fordings, a beautiful concert hall in the countryside. There waits the charming Dilys Maine, and a party buzzing with rumours of one Rosemary Reeve who disappeared on the eve of this event the previous year, not found to this day. With thoughts of mysterious case ringing in their ears, Dilys and Nicholas strike a stranger on the drive back home, launching a new investigation and unwittingly reviving the search for what really became of Rosemary Reeve.

Written in the last years of the author's life, this previously unpublished novel is a tribute to Lorac's enduring skill for constructing an ingenious puzzle, replete with memorable characters and gripping detective work.

E.C.R. LORAC was a pen name of Edith Caroline Rivett (1894-1958) who was a prolific writer of crime fiction from the 1930s to the 1950s, and a member of the prestigious Detection Club. Her books have been almost entirely neglected since her death, but deserve rediscovery as fine examples of classic British crime fiction in its golden age.

"With this puzzler by E. C. R. Lorac (1894–1958), the British Library Crime Classics series adds a never-before-published mystery to its collection...[The Two-Way Murder] has all the earmarks of classic Golden Age fiction, including intense atmosphere, characters with warring motivations, and an absolutely unguessable ending that, when explained by the chief detective, makes perfect sense. A lucky find." — Booklist, Starred Review