Rest in Pieces: The Curious Fates of Famous Corpses (Paperback) 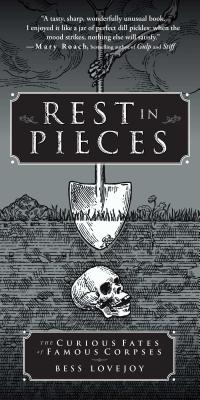 A “marvelously macabre” (Kirkus Reviews) history of the bizarre afterlives of corpses of the celebrated and notorious dead.

For some of the most influential figures in history, death marked the start of a new adventure. The famous deceased have been stolen, burned, sold, pickled, frozen, stuffed, impersonated, and even filed away in a lawyer’s office. Their fingers, teeth, toes, arms, legs, skulls, hearts, lungs, and nether regions have embarked on voyages that crisscross the globe and stretch the imagination.

Counterfeiters tried to steal Lincoln’s corpse. Einstein’s brain went on a cross-country road trip. And after Lord Horatio Nelson perished at Trafalgar, his sailors submerged him in brandy—which they drank.

From Alexander the Great to Elvis Presley, and from Beethoven to Dorothy Parker, Rest in Pieces connects the lives of the famous dead to the hilarious and horrifying adventures of their corpses, and traces the evolution of cultural attitudes toward death.

Bess Lovejoy is a writer, researcher, and editor based in Brooklyn. She worked on the Schott’s Almanac series for five years, and her writing has also appeared in The New York Times, The Believer, The Boston Globe, and elsewhere.