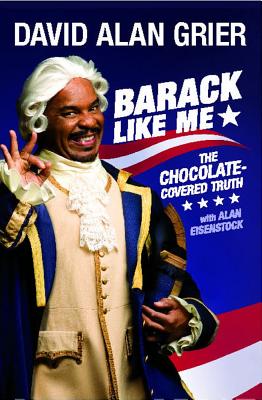 By David Alan Grier, Alan Eisenstock (With)
$16.99
OUT OF STOCK - Available To Order

Grier’s television credits are abundant.   Grier is well known as being a principle cast member of the acclaimed television series “In Living Color,” where he helped to create some of that show’s most memorable characters, and also as a co-star on Bonnie Hunt’s hit ABC comedy “Life With Bonnie.”   He also starred on the hit NBC show “DAG” where he played the title character, as well Keeping his close comedic relationship with the Wayans’ brothers, he co-starred with Damon Wayans in “Damon.” He also starred in the television miniseries “The 60s,” and “King of Texas” for cable television.

David recently appreared on the hit tv show Dancing With the Stars in which he danced his heart out for four episodes and then had a very public meltdown when he was eliminated that went viral on the internet. Grier also appeared in the Wayans Family's hit 2009 movie, 'Dance Flick' in which The New York Times gushed "Mr. Grier ultimately steals the movie with a tour-de-force". He is currently working on a stand-up comedy tour that may culminate in a special on Comedy Central about the experiences written about in Barack Like Me!!!

"David's humor, wit and intelligence are as big as his penis...Huge! He is single-handedly keeping the black comedy myth alive." -- Chelsea Handler

"Barack Like Me is the most important book since Alex Haley's third book, Boots. With Barack Like Me, David Alan Grier has created a world of wizards and goblins that will surely become a great TV movie someday." -- Chris Rock

"Hilarious! Pure DAG, Barack Like Me is a magical romp through one man's history that offers Americans a chance to examine its own. Full of surprises and profound insights, DAG takes readers on a modern journey through the looking glass of his life." -- Dr. Drew Pinsky

"This book is funny and thought provoking. DAG may be the greatest Black American since Dr. Julius Washington Irving Carver!" -- Adam Carolla

"This book will surprise and delight you. It's a splendid read!" -- Lewis Black

"A comic of undeniable charm and supple skills." -- The Washington Post