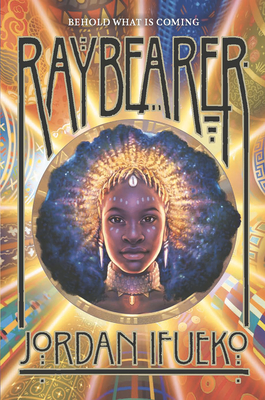 “In Raybearer, Tarisai’s longing for family and connection make her empathetic and relatable, while her strength and fortitude in standing up to corrupt power make her admirable. I loved diving into this fully realized fantasy world and rooting for Tarisai’s success every step of the way. The story also touches on colonialism and the value of culture — very timely and important subjects — and includes an ace supporting character. A great read for fans of fantasy, stories with strong female leads, and anyone looking for a good book!”
— Stephanie Seales, Bookshop Santa Cruz, Santa Cruz, CA

Named one of the best books of the year by People Magazine, Buzzfeed, New York Public Library, Chicago Public Library, KirkusReviews, School Library Journal, Publishers Weekly, and more "Dazzling... All hail Raybearer." --Entertainment Weekly
"Lush, intriguing, and perfectly paced." --Buzzfeed
"An exquisitely detailedworld." --PopSugar
"Brilliantly conceived fantasy." --People Magazine Fans of Sabaa Tahir and Tomi Adeyemi won't want to miss this instant New York Times bestselling fantasy from breakout YA sensation Jordan Ifueko Nothing is more important than loyalty. But what if you've sworn to protect the one you were born to destroy? Tarisai has always longed for the warmth of a family. She was raised in isolation by a mysterious, often absent mother known only as The Lady. The Lady sends her to the capital of the global empire of Aritsar to compete with other children to be chosen as one of the Crown Prince's Council of 11. If she's picked, she'll be joined with the other Council members through the Ray, a bond deeper than blood. That closeness is irresistible to Tarisai, who has always wanted to belong somewhere. But The Lady has other ideas, including a magical wish that Tarisai is compelled to obey: Kill the Crown Prince once she gains his trust. Tarisai won't stand by and become someone's pawn--but is she strong enough to choose a different path for herself? With extraordinary world-building and breathtaking prose, Raybearer is the story of loyalty, fate, and the lengths we're willing to go for the ones we love.

Jordan Ifueko is a Nigerian American writer who grew up eating fried plantains while reading comic books under a blanket fort. She now lives in Los Angeles with her husband and their collection of Black Panther Funko Pops. Raybearer is her debut novel.