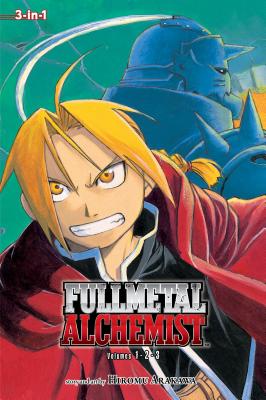 Bargain omnibus editions of one of the best-selling manga series of all time!

In an alchemical ritual gone wrong, Edward Elric lost his arm and his leg, and his brother Alphonse became nothing but a soul in a suit of armor. Equipped with mechanical ""auto-mail"" limbs, Edward becomes a state alchemist, seeking the one thing that can restore his and his brother's bodies...the legendary Philosopher's Stone.

Alchemy: the mystical power to alter the natural world, somewhere between magic, art and science. When two brothers, Edward and Alphonse Elric, dabbled in these powers to grant their dearest wish, one of them lost an arm and a leg...and the other became nothing but a soul locked into a body of living iron. Now they are agents of the government, slaves of the military-alchemical complex, using their unique powers to obey their orders...even to kill. But their powers aren't unique. The world crawls with evil alchemists. And in pursuit of the ultimate alchemical treasure, the Philosopher's Stone, their enemies are even more ruthless than they are...

Born in Hokkaido, Japan, Hiromu Arakawa first attracted attention in 1999 with her award-winning manga Stray Dog. Her series Fullmetal Alchemist was serialized from 2001 to 2010 with a story that spanned 27 volumes and became an international critical and commercial success, receiving both the Shogakukan Manga Award and Seiun Award and selling over 70 million copies worldwide. Fullmetal Alchemist has been adapted into anime twice, first as Fullmetal Alchemist in 2003 and again as Fullmetal Alchemist: Brotherhood in 2009. The series has also inspired numerous films, video games and novels.