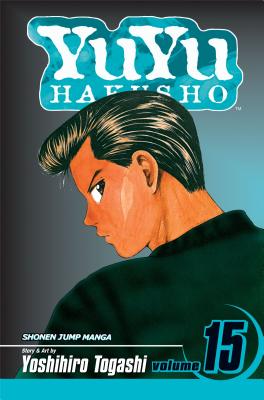 By Yoshihiro Togashi
$9.99
OUT OF STOCK - Available To Order

This is book number 15 in the YuYu Hakusho series.

A delinquent’s gotta do what he’s gotta do…in the afterlife.

Yusuke Urameshi was a tough teen delinquent until one selfless act changed his life...by ending it. When he died saving a little kid from a speeding car, the afterlife didn't know what to do with him, so it gave him a second chance at life. Now, Yusuke is a ghost with a mission, performing good deeds at the behest of Botan, the ferrywoman of the River Styx, and Koenma, the pacifier-sucking judge of the dead.

Kuwabara's been kidnapped! Unbeknownst to anyone--especially him--his aura sword is so powerful it can actually cut holes between dimensions, which is exactly what his kidnapper Sensui is after. But Yusuke's not giving up so easily and sets off in pursuit on a bicycle.

Then Yusuke and his old friends and new allies are put to the test when they battle a bratty little kid in a deadly video game contest! From trivia to battle tennis, the contest heats up! Who will come out on top and who will face the dreaded "Game Over"?

Yoshihiro Togashi's manga career began in 1986 at the age of 20, when he won the coveted Osamu Tezuka Award for new manga artists. He debuted in the Japanese Weekly Shonen Jump magazine in 1989 with the romantic comedy Tende ShÃ´waru Cupid. From 1990 to 1994 he wrote and drew the hit manga YuYu Hakusho, which was followed by the dark comedy science-fiction series Level E and the adventure series Hunter x Hunter. In 1999 he married the manga artist Naoko Takeuchi.