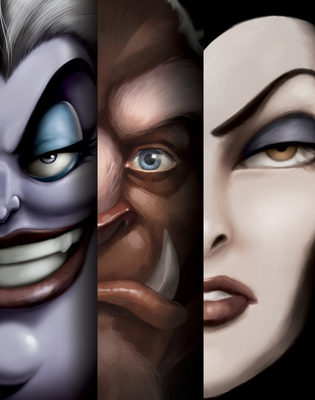 The first three books in Serena Valentino’s New York Times best-selling Villains series, together in one paperback box set for the first time! With all-new art, this box set is the perfect entry point for newcomers to the series, and is a covetable collectible for existing fans.
Fairest of All
The tale of the young princess Snow White and her evil stepmother the Wicked Queen is widely known. Despite a few variations from telling to telling, the story remains the same—the Queen was jealous of the girl’s beauty, and this jealousy culminated in the Queen’s attempt on the sweet, naive girl’s life. Another tale far less often spoken of is the one that explains what caused the Queen to become so contemptuously vile. Still, some have attempted to guess at the reason. Perhaps the Queen’s true nature was that of a wicked hag and her beautiful, regal appearance a disguise used to fool the King. Others claim that the Queen might have hated the girl for her resemblance to the King’s first wife. Mostly, the Queen is painted as a morally abhorrent woman who never loved another being during the course of her miserable life. In fact, the theories about exactly what caused the Queen’s obsessive vanity and jealous rage are too numerous to catalog. This book recounts a version of the story that has remained untold until now. It is a tragic tale of love and loss, and it contains a bit of magic. It is a tale of the Wicked Queen. . .
The Beast Within
The tale is as old as time: a cruel prince is transformed into a beast. A lovely maiden comes into this monster’s life. He is transformed by her compassion, and the love he feels for her in return. The two live happily ever after. But any tale, especially one as storied as Beauty and the Beast’s, has been told many different times, and in many different ways. No matter which version one hears, the nagging question remains: what was it that transformed the prince into the beast we are introduced to? This is one version, pulled from the many passed down through the ages. It’s a story of vanity and arrogance, of love and hatred, of beastliness, and, of course, of beauty.
Poor Unfortunate Souls
The tale of the sea king’s daughter Ariel is a beloved one of losing—and then finding—one’s own voice. The story has been told many times and in many ways. But always the mergirl wants more than her world can offer, and her father demands that she live within the confines of his domain. Her rebelliousness costs the little mermaid her voice and nearly her soul. But the power of good prevails, and Ariel emerges proud and changed. And yet this is only half the story. So what of Ariel’s nemesis, Ursula, the sea witch? What led to her becoming so twisted, scorned, and filled with hatred? Many tales have tried to explain her motives. Here is one account of what might have shaped the sea witch into a detestable and poor unfortunate soul.

Serena Valentino has been weaving tales that combine mythos and guile for the past decade. She has earned critical acclaim in both the comic and horror domains, where she is known for her unique style of storytelling, bringing her readers into exquisitely frightening worlds filled with terror, beauty, and extraordinary protagonists. The books in her best-selling Villains series are best enjoyed when read in the following order: Fairest of All, The Beast Within, Poor Unfortunate Soul, Mistress of All Evil, Mother Knows Best, Odd Sisters,and Evil Thing.