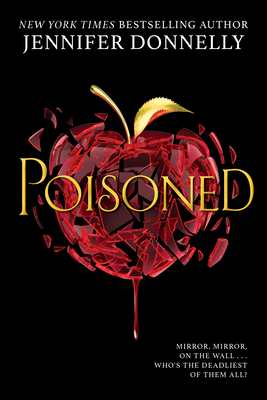 By Jennifer Donnelly
$17.99
OUT OF STOCK - Please Allow Extra Time

From Jennifer Donnelly, author of the acclaimed New York Times bestseller Stepsister, comes a fairytale retelling that'll forever change the way you think about strength, power, and the real meaning of "happily ever after."
Once upon a time, a girl named Sophie rode into the forest with the queen's huntsman. Her lips were the color of ripe cherries, her skin as soft as new-fallen snow, her hair as dark as midnight. When they stopped to rest, the huntsman pulled out his knife . . . and took Sophie's heart.

It shouldn't have come as a surprise. Sophie had heard the rumors, the whispers. They said she was too kind and foolish to rule -- a waste of a princess. A disaster of a future queen. And Sophie believed them. She believed everything she'd heard about herself, the poisonous words people use to keep girls like Sophie from becoming too powerful, too strong . . .

With the help of seven mysterious strangers, Sophie manages to survive. But when she realizes that the jealous queen might not be to blame, Sophie must find the courage to face an even more terrifying enemy, proving that even the darkest magic can't extinguish the fire burning inside every girl, and that kindness is the ultimate form of strength.

Jennifer Donnelly is the author of A Northern Light, which was awarded a Printz Honor and a Carnegie Medal;Revolution (named a Best Book by Amazon, Kirkus Reviews, School Library Journal, and the Chicago Public Library, and nominated for a Carnegie Medal); the Deep Blue series; and many other books for young readers, including Lost in a Book, which spent more than 20 weeks on the New York Times bestseller list. She lives in New York's Hudson Valley.

"An empowering and action-packed feminist retelling that will be popular with fantasy and fairy tale-loving teens." -- School Library Journal

"[Sophie's] is a journey of self-discovery and empowerment, wrapped up in a thrilling fantasy adventure." -- The Guardian

"Donnelly thoughtfully and critically unwinds the fairy tale of Snow White and the Seven Dwarves . . . With adept prose, Donnelly twists the familiar story until it bursts, artfully examining the forces that motivate us . . . A finale hints that more variations on this theme are to come, and readers will welcome them." -- Booklist

"A good accompaniment to Donnelly's own Stepsister and Haydu's Ever Cursed." -- Bulletin of the Center for Children's Books

* "The gorgeous prose and the fairy-tale themes have obvious appeal, but the real strengths here are the depth of character across the board; the examination of the cost of beauty in a world that reveres it; and Isabelle herself, a shattered but not unreedemable girl with a warrior's heart." -- Booklist, starred review

"This is another needed voice exposing cultural myths that suffocate girls in the name of likability and pit them against one another in the name of beauty." -- The Bulletin of the Center for Children's Books