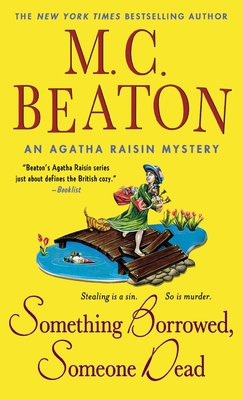 This is book number 24 in the Agatha Raisin Mysteries series.

Gloria French was a jolly widow with dyed blonde hair, a raucous laugh and rosy cheeks. When she first moved from London to the charming Cotswolds hills, she was heartily welcomed. She seemed a do-gooder par excellence, raising funds for the church and caring for the elderly. But she had a nasty habit of borrowing things and not giving them back, just small things, a teapot here, a set of silverware there. So it's quite the shock when she is found dead, murdered by a poisoned bottle of elderberry wine. Afraid the murder will be a blight on the small town, Parish councillor, Jerry Tarrant, hires private detective Agatha Raisin to track down the murderer.

But the village is secretive and the residents resent Agatha's investigation. Of course that doesn't stop the ever-persistent Agatha from investigating and sticking her nose where no one wants it—especially as the suspect list grows. And, as if it isn't enough that Agatha's ex has reentered the picture, the murderer is now targeting Agatha!

With M.C. Beaton's Something Borrowed, Someone Dead the bossy, vain, and absolutely irresistible, Agatha Raisin continues to be a fan favorite.

“As always, M. C. Beaton presents us with an Agatha Raisin who manages to infuriate, amuse and solicit our deepest sympathies as we watch her blunder her way boldly through another murder mystery.” —Bookreporter.com on Hiss and Hers

“I know I once vowed to read only Agatha Christie for a year, but I've cheated. My No. 1 mistress: M.C. Beaton and her Agatha Raisin whodunits. Agatha is like Miss Marple with a drinking problem, pack-a-day habit, and major man lust.” —Entertainment Weekly on A Spoonful of Poison