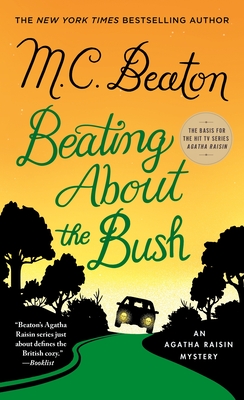 This is book number 30 in the Agatha Raisin Mysteries series.

New York Times bestseller M. C. Beaton's cranky, crafty Agatha Raisin—now the star of a hit T.V. show—is back on the case again in Beating About the Bush.

She won’t let any moss grow under her feet…

When private detective Agatha Raisin comes across a severed leg in a roadside hedge, it looks like she is about to become involved in a particularly gruesome murder. Looks, however, can be deceiving, as Agatha discovers when she is employed to investigate a case of industrial espionage at a factory where nothing is quite what it seems.

The factory mystery soon turns to murder and a bad-tempered donkey turns Agatha into a national celebrity, before bringing her ridicule and shame. To add to her woes, Agatha finds herself grappling with growing feelings for her friend and occasional lover, Sir Charles Fraith. Then, as a possible solution to the factory murder unfolds, her own life is thrown into deadly peril. Will Agatha get her man at last? Or will the killer get her first?

"Winning....Cozy fans with a taste for the silly and the offbeat will be gratified. This long-running series shows no signs of losing steam." —Publishers Weekly

"As usual, Beaton conceals any number of surprises behind her trademark wry humor." —Kirkus Reviews

"Agatha is in top form in bestseller Beaton's twenty-seventh mystery....A twisty plot, a familiar cast of eccentric characters, and a charming English country setting mean that lovers of cozy mysteries will be satisfied indeed." —Publishers Weekly on Pushing Up Daisies

"M.C. Beaton has a foolproof plot for the village mystery." —The New York Times Book Review

"Beaton has a winner in the irrepressible, romance-hungry Agatha." —Chicago Sun-Times