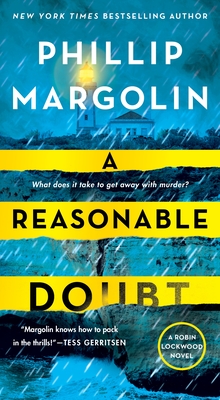 This is book number 3 in the Robin Lockwood series.

Justice is blind. But how do you solve a crime that no one could see?

Criminal defense attorney and former MMA fighter Robin Lockwood does not believe in magic. Behind every good illusion is a good explanation—unless you consider the work of Robert Chesterfield, that is. One of her firm’s former clients, Chesterfield is a career magician who was linked to a series of suspicious deaths. Even though he walked free, Robin can’t help but wonder whether he was as innocent as he appeared.

Now, decades later, the mystery surrounding Chesterfield has taken a dark turn. When he stages his greatest-ever trick, called the Chamber of Death, Chesterfield himself turns up dead at the end. With dozens of witnesses—and no one with any idea of how it was orchestrated—Robin finds herself at loose ends as she tries to untangle this twisted case…and learn the truth about Chesterfield, once and for all.

“In the hands of Phillip Margolin, nothing is ever simple and no one is really safe. He is the master of suspense mystery.”—Associated Press

“A smooth, tight narrative with a snappy, old-time whodunit finish. Margolin pulls off his own sleight of hand when the murderer is revealed.”—Booklist