Not So Innocently Abroad: Official State Department Tour or Sinister Government Plot to Disappear Me? (Paperback) 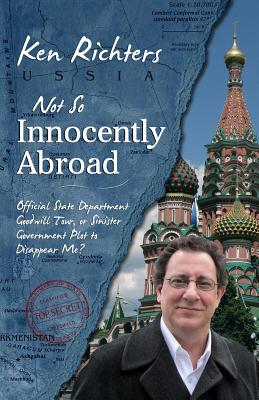 By Ken Richters
$14.99
OUT OF STOCK - Please Allow Extra Time

From award-winning actor and playwright Ken Richters comes this original, irreverent, and funny travel memoir of his month-long U.S. Department of State goodwill tour of Russia and Ukraine. Before Russian President Vladimir Putin's 2014 takeover of Ukraine's Crimea region, and after spending more than 30 years performing as Mark Twain (satirizing every government official and politician within earshot), the actor received a series of furtive phone calls from Hillary Clinton's State Department asking him to leave the United States for the former Soviet Union. Richters agreed to the performance tour, but the diplomatic communiqu's left him to wonder if the proposed trip was an "official" State Department trip, or sinister plot by one of the many politicians and government officials he offended during his career (including seven U.S. senators, fifteen past and present members of Congress, twenty-six state governors, countless local politicians from all fifty states and a sitting justice of the United States Supreme Court) to have him permanently "disappeared." Originally scheduled for two shows in Moscow, the mission was extended for nearly a month to retrace Twain's travels in Eastern Europe. The book chronicles performance stops in Moscow, Kiev, Odessa, Simferopol, Sevastopol, and the Livadia Palace in Yalta; almost causing a diplomatic incident involving the Russian Black Sea Fleet in Crimea; hallucinating on a road trip while taking suprisingly-powerful over-the-counter Ukranian medication, seeing a naked Oprah Winfrey and matryoshka doll juggling monkey riding shotgun, after self-medicating in an attempt to cure the Crimean Croup; and how, unknowingly, making the same observation about the beauty of Ukrainian women that caused Vice President Joe Biden public ridicule, elevated Richters to a Ukrainian media cause c l bre.

Ken Richters first began performing in the early 1970's as a singer and featured dancer with a number of regional theaters throughout New England. Since that time, he has displayed a unique blending of talents rarely seen in a single performer. A familiar face to television audiences around the country, he has been seen in a number of weekly series and made-for-television movies. His motion picture work includes a starring role in the award-winning independent film "Jean," which was produced by Tom Fontana. His performance as Mark Twain was first brought to national acclaim in 1981. Following a sold-out engagement in Washington, D.C., television newscasters from across the country had great fun covering Twain's salty comments to members of the United States Congress. Since that time, the production has been performed more than 1000 times in all 50 states, Canada, and Europe. The millennium found Ken Richters as Mark Twain sharing the stage with another great American author, Tom Wolfe, as part of Harper's Magazine star-studded 150th Anniversary Gala celebration in New York. Following that performance, PBS had him provide the voice of Mark Twain for their controversial series "Culture Shock-Challenging Art." Between television and motion picture engagements, he has performed extensively in the legit end of show business, starring in such live stage productions as "Big River, Oklahoma, "They're Playing Our Song, " "Promises Promises, " "Company, " "George M, " and "Die Fledermaus." Well known for his considerable vocal range, he has been the on-camera and live industrial spokesman for more than 50 large U.S. and European corporations, including the IBM, and Lloyds of London. Television and radio commercial credits include "Coca-Cola," "AT&T," and "Federal Express." Visitors to the Smithsonian in Washington, D.C. can hear Ken's work with Walter Cronkite narrating the history of Fast Attack Submarines. In addition, Ken spends time each year working on a number of special projects. He has been the opening act for many show-business veterans including The Temptations, Roberta Flack, the late Laura Branigan and Henny Youngman, and The Smothers Brothers; co-starred with Academy Award actress Nina Foch in her life's retrospective, "An Evening with Nina Foch." He often works behind-the-scenes doing private coaching and consultation with corporate executives, politicians, and bestselling authors, to assist them in preparing for public appearances.