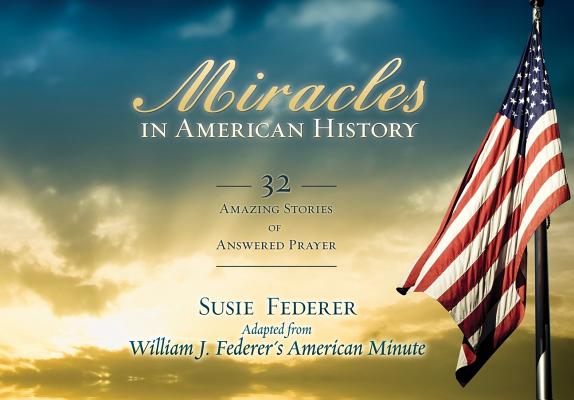 Discover desperate circumstances in America's past and how men and women rose up with faith and courage and situations unexplainably turned around. Read of captivating, little-known stories during the French & Indian War, Revolution, Barbary Pirate War, War of 1812, Civil War, WWI & II, and up through Apollo 13. Learn "the rest of the story" of how leaders prayed, challenged and inspired the nation and disaster was averted YOU will be inspired as you uncover "Miracles in American History - 32 Amazing Stories of Answered Prayer." ARE you aware of these past crises when America's fate hung in the balance? In 1746, 70 ships with 13,000 troops sailed from France to lay waste to the American colonies. Massachusetts Governor William Shirley proclaimed a Day of Fasting. What happened next was unexplainable After the Battle of Monongahela, George Washington wrote from Fort Cumberland to his younger brother, John Augustine Washington, July 18, 1755: But by the All-Powerful Dispensations of Providence, I have been protected beyond all human probability or expectation; for I had four bullets through my coat, and two horses shot under me, yet escaped unhurt, although death was leveling my companions on every side of me How did Thomas Jefferson's resolution for a Day of Fasting on June 1, 1774, lead to the forming of the Continental Congress, and eventually Independence? Read how in 1781 the providential rising of three rivers in 10 days allowed Americans to escape British General Cornwallis? Or how the uncanny way Benedict Arnold's planned betrayal of West Point was discovered? George Washington exclaimed: "The Hand of Providence has been so conspicuous in all this (the course of the war) that he must be worse than an infidel that lacks faith." Ben Franklin declared: "In the beginning of the Contest with Great Britain...we had daily prayer in this room for Divine protection...All of us who were engaged in the struggle must have observed frequent instances of a Superintending Providence in our favor." In 1865, President Lincoln proclaimed a Day of Fasting for April 30. What freak accident happened two days later which changed the course of the Civil War? What did Woodrow Wilson declared as the U.S. entered WWI. Or Herbert Hoover during the Great Depression? Or FDR, Eisenhower, MacArthur and Patton during WWII? Or Truman during the Korean War? When Apollo 13 was lost in space, what happened after President Nixon called all of America to pray? Are you aware of these American Miracles? Find out as you read "Miracles in American History - 32 Amazing Stories of Answered Prayer.