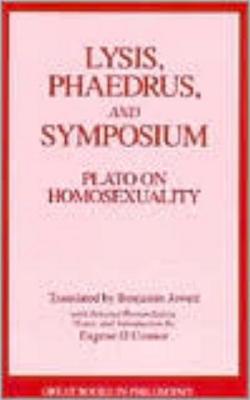 "And when the other is beside him, he shares his respite from anguish; when he is absent, he likewise shares his longing and being longed for, since he possesses that counterlove which is the image of love, though he supposes it to be friendship rather than love, and calls it by that name" (from the Phaedrus).

The nature of love and friendship and their varying manifestations have stimulated philosophical interest for centuries. How should we understand such concepts as: the beloved, physical beauty, the beauty that transcends the physical, and the power of love between men as the ancient Greeks understood it? In these three dialogues, the Lysis, Phaedrus, and Symposium, Socrates, the gadfly of Athens, searches for the truth about love and friendship. In doing so, he reveals how his Athenian contemporaries regarded homosexual love as an educative, aesthetic, and social force.

PLATO was born about 427 B.C.E. into the distinguished Athenian family of Ariston and Perictione. Although interested in politics as a young man, he became disenchanted with the cruel and immoral behavior of Athenian rulers. Some small ray of hope emerged when Athens deposed its dictators and established a democracy; however, when the citizens put the philosopher Socrates on trial and later executed him for impiety, Plato left Athens to travel abroad.

In 387 B.C.E., Plato finally returned to Athens and created the Academy, an intellectual center for philosophy and science that offered scholarly training in such fields as astronomy, biological sciences, mathematics, and political science. From this influen­tial institution emerged Aristotle, Plato's most famous student. Plato dedicated himself to the Academy until his death in about 347 B.C.E.

During his lifetime Plato wrote a number of supremely important dialogues, which presented and critically analyzed significant philosophical ideas in metaphysics, epistemology, ethics, and social and political philosophy—all of which con­tinue to engage posterity. His better-known dialogues include: The Apology, Cratylus, Crito, Euthyphro, Gorgias, The Laws, Meno, Parmenides, Phaedo, Phaedrus, Protagoras, The Repub­lic, The Sophist, The Symposium, Theaetetus, and Timaeus.