The Weed That Strings the Hangman's Bag: A Flavia de Luce Mystery (CD-Audio) 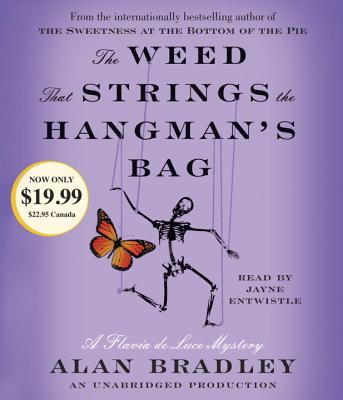 By Alan Bradley, Jayne Entwistle (Read by)
$19.99
Email or call for price.

From Dagger Award–winning and internationally bestselling author Alan Bradley comes this utterly beguiling mystery starring one of fiction’s most remarkable sleuths: Flavia de Luce, a dangerously brilliant eleven-year-old with a passion for chemistry and a genius for solving murders. This time, Flavia finds herself untangling two deaths—separated by time but linked by the unlikeliest of threads.

Flavia thinks that her days of crime-solving in the bucolic English hamlet of Bishop’s Lacy are over—and then Rupert Porson has an unfortunate rendezvous with electricity. The beloved puppeteer has had his own strings sizzled, but who’d do such a thing and why? For Flavia, the questions are intriguing enough to make her put aside her chemistry experiments and schemes of vengeance against her insufferable big sisters. Astride Gladys, her trusty bicycle, Flavia sets out from the de Luces’ crumbling family mansion in search of Bishop’s Lacey’s deadliest secrets.

Does the madwoman who lives in Gibbet Wood know more than she’s letting on? What of the vicar’s odd ministrations to the catatonic woman in the dovecote? Then there’s a German pilot obsessed with the Brontë sisters, a reproachful spinster aunt, and even a box of poisoned chocolates. Most troubling of all is Porson’s assistant, the charming but erratic Nialla. All clues point toward a suspicious death years earlier and a case the local constables can’t solve—without Flavia’s help. But in getting so close to who’s secretly pulling the strings of this dance of death, has our precocious heroine finally gotten in way over her head?

Alan Bradley is the internationally bestselling author of many short stories, children’s stories, newspaper columns, and the memoir The Shoebox Bible. His first Flavia de Luce novel, The Sweetness at the Bottom of the Pie, received the Crime Writers’ Association Debut Dagger Award, the Dilys Winn Award, the Arthur Ellis Award, the Agatha Award, the Macavity Award, and the Barry Award, and was nominated for the Anthony Award. His other Flavia de Luce novels are The Weed That Strings the Hangman’s Bag, A Red Herring Without Mustard, and I Am Half-Sick of Shadows.