Vicksburg Is the Key: The Struggle for the Mississippi River (Great Campaigns of the Civil War) (Paperback) 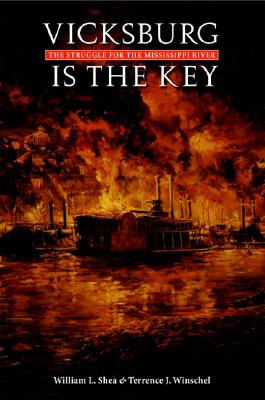 The struggle for control of the Mississippi River was the longest and most complex campaign of the Civil War. It was marked by an extraordinary diversity of military and naval operations, including fleet engagements, cavalry raids, amphibious landings, pitched battles, and the two longest sieges in American history. Every existing type of naval vessel, from sailing ship to armored ram, played a role, and military engineers practiced their art on a scale never before witnessed in modern warfare. Union commanders such as Grant, Sherman, Farragut, and Porter demonstrated the skills that would take them to the highest levels of command. When the immense contest finally reached its climax at Vicksburg and Port Hudson in the summer of 1863, the Confederacy suffered a blow from which it never recovered. Here was the true turning point of the Civil War. This fast-paced, gripping narrative of the Civil War struggle for the Mississippi River is the first comprehensive single-volume account to appear in over a century. Vicksburg Is the Key: The Struggle for the Mississippi River tells the story of the series of campaigns the Union conducted on land and water to conquer Vicksburg and of the many efforts by the Confederates to break the siege of the fortress. William L. Shea and Terrence J. Winschel present the unfolding drama of the campaign in a clear and readable style, correct historic myths along the way, and examine the profound strategic effects of the eventual Union victory.

William L. Shea is author and coauthor of numerous books on the Civil War, including Pea Ridge: Civil War Campaign in the West, Fields of Blood: The Prairie Grove Campaign, and Vicksburg Is the Key: The Struggle for the Mississippi River (Nebraska, 2005).

“Vicksburg Is the Key is a masterful synthesis bolstered by fresh and insightful analysis, and it is a major contribution to the literature on the Civil War.”—Thomas DeBlack, Journal of Southern History

"Many books have been published about the Vicksburg Campaign, perhaps more than about any other military event in the West. . . . This book is one of the best."—Albert Castel, The North Carolina Historical Review

"[A] very perceptive and well crafted study of the operations along the Mississippi River in 1862-1863, the authors have expertly prepared a book that reveals the essence of the Vicksburg Campaign, yet it is not so detailed as to obscure the central course of events. The overview of the significance, maneuvers, strategy, and fighting is superb, and this book will be a welcome introduction for many to the critical events and personal performances at Vicksburg and Port Hudson."—Wiley Sword, Blue and Gray

"A superb, highly readable account of the extraordinarily diverse and complicated Vicksburg campaign. . . . This well-written book highlights the military planning and execution-within their strategic, political, and economic contexts-of the Union operations to seize, and Confederate efforts to defend, the 'Gibraltar of the Mississippi.'"—Military Heritage

"The Shea and Winschel volume provides the best overview of the operations that opened the Mississippi River for the Union. This book is essential reading for all students of modern warfare."—Edgar F. Raines Jr., Journal of Illinois History

"A fascinating look into an amazingly complex and intriguing operation. . . . Vicksburg is the Key will stand as the best overall one-volume account for many years."—Timothy B. Smith, Georgia Historical Quarterly

“Vicksburg is the Key is a masterful synthesis bolstered by fresh and insightful analysis, and it is a major contribution to the literature on the Civil War.”—Thomas A. DeBlack, Journal of Southern History

"An excellent overview of this crucial episode. . . . An engaging, well-written narrative."—William Feis, The Journal of Military History

"Shea and Winschel do an outstanding job of placing their narrative in the context of the war in the Western theater."—Kurt Hackemer, Louisiana History

“This book is essential reading for anyone interested in the Civil War. It is a very well-written, succinct account of one of the most vital campaigns of the war. The authors pack volumes into a short two hundred pages and never lose their engaging narrative momentum.”—Lorien Foote, Arkansas Historical Quarterly