First Meetings: In Ender's Universe (Other Tales from the Ender Universe) (Mass Market) 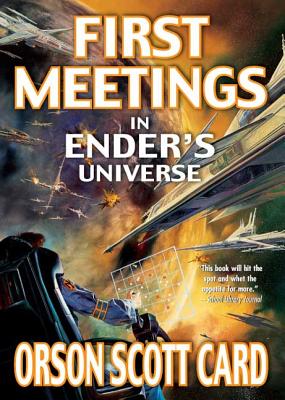 By Orson Scott Card
Email or call for price.
Out of Print - Not Available to Order

When "Ender's Game" was first published as a novella twenty-five years ago few would have predicted that it would become one of the most successful ventures in publishing history. Expanded into a novel in 1985, Ender's Game won both the Hugo Award and the Nebula Award for Best Novel. Never out of print and translated into dozens of languages, it is the rare work of fiction that can truly be said to have transcended a genre. Ender's Game and its sequels have won dozens of prestigious awards and are as popular today among teens and young readers as adults.

First Meetings is a collection of three novellas-plus the original "Ender's Game"-that journey into the origins and the destiny of one Ender Wiggin.

Fully illustrated, First Meetings is Orson Scott Card writing at the height of his considerable power about his most compelling character.

The Second Formic War (with Aaron Johnston)
The Swarm / The Hive

Orson Scott Card is best known for his science fiction novel Ender's Game and its many sequels that expand the Ender Universe into the far future and the near past. Those books are organized into the Ender Quintet, the five books that chronicle the life of Ender Wiggin; the Shadow Series, which follows on the novel Ender's Shadow and are set on Earth; and the Formic Wars series, written with co-author Aaron Johnston, which tells of the terrible first contact between humans and the alien "Buggers." Card has been a working writer since the 1970s. Beginning with dozens of plays and musical comedies produced in the 1960s and 70s, Card's first published fiction appeared in 1977--the short story "Gert Fram" in the July issue of The Ensign, and the novelette version of "Ender's Game" in the August issue of Analog. The novel-length version of Ender's Game, published in 1984 and continuously in print since then, became the basis of the 2013 film, starring Asa Butterfield, Harrison Ford, Ben Kingsley, Hailee Steinfeld, Viola Davis, and Abigail Breslin.

Card was born in Washington state, and grew up in California, Arizona, and Utah. He served a mission for the LDS Church in Brazil in the early 1970s. Besides his writing, he runs occasional writers' workshops and directs plays. He frequently teaches writing and literature courses at Southern Virginia University.

He is the author many science fiction and fantasy novels, including the American frontier fantasy series "The Tales of Alvin Maker" (beginning with Seventh Son), and stand-alone novels like Pastwatch and Hart's Hope. He has collaborated with his daughter Emily Card on a manga series, Laddertop. He has also written contemporary thrillers like Empire and historical novels like the monumental Saints and the religious novels Sarah and Rachel and Leah. Card's work also includes the Mithermages books (Lost Gate, Gate Thief), contemporary magical fantasy for readers both young and old.

Card lives in Greensboro, North Carolina, with his wife, Kristine Allen Card. He and Kristine are the parents of five children and several grandchildren.

“[An] appealing and entertaining collection of tales....For newcomers to Ender's universe and longtime fans, this book will hit the spot and whet the appetite for more.” —School Library Journal on First Meetings

“Showcases Card's talent at developing the inner life of a character. Even those who are intimately familiar with the concepts of the Game from later Ender books will be struck anew by Card's virtuosity. His powerful voice and startlingly clear vision will draw many new readers into a lifelong love of science fiction.” —Publishers Weekly on First Meetings

“These stories demonstrate the assured scene setting, apparently effortlessly sustained suspense, and moral preoccupation with the responsibilities of kinship and friendship that distinguishes Ender's entire saga.” —Booklist on First Meetings