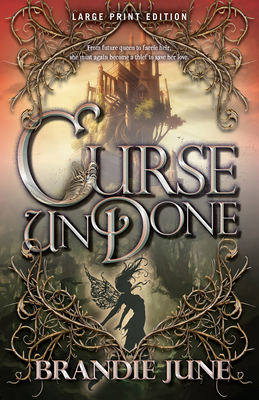 This is book number 2 in the Gold Spun Duology series.

Nor and King Casper are captured by the fay army and forced to face the indomitable Faerie Queen, Marasina. At her command, Casper is thrown into a mysterious prison while an even sinister fate is in store for Nor—a deadly fay poison that reveals Nor’s true nature. She’s not only half-fay. She is Queen Marasina’s heir.

Revealed to be like the very creatures she despises, Nor must not only find a way to free Casper but also navigate a court that is as deadly as it is beautiful. Her allies are few, and though Pel claims to want friendship, Nor finds she cannot forgive his betrayal. As tensions mount and war looms between the kingdoms, Nor must choose a side, before it’s too late.

In this epic conclusion to the Gold Spun duology, Nor discovers that a glamour and a curse may be two sides of the same coin.

Brandie June spent most of her childhood onstage or reading, as both activities let her live in fantastic stories. She moved to Los Angeles to study acting at UCLA, and eventually branched out into costume design and playwriting. While she spends most of her free time writing, she will still take any excuse to play dress-up, especially if it involves wearing a crown. She happily promotes more stories as a marketing director for kids’ films and anime. When not writing or marketing, she can often be found doing aerial arts, playing board games, drinking too much espresso, and coming up with new art projects. She lives with her husband, two spoiled rescue pups, a spoiled cat, six fish tanks, and five bookshelves. You can find out more about her at www.brandiejune.com and follow her @brandiejune.