The House of the Scorpion (CD-Audio) 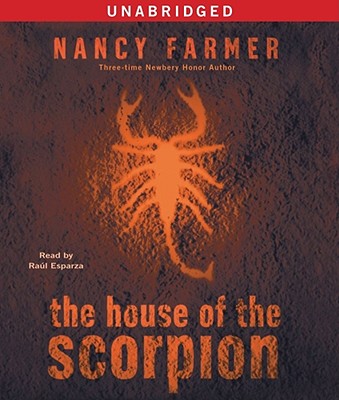 By Nancy Farmer, Raul Esparza (Read by)
Email or call for price.
Hard to Find - Email or Call for Availability

This modern classic takes on an iron-fisted drug lord, clones bred for their organs, and what it means to be human. Winner of the National Book Award as well as Newbery and Printz Honors.

Matteo Alacrán was not born; he was harvested. His DNA came from El Patrón, lord of a country called Opium—a strip of poppy fields lying between the United States and what was once called Mexico. Matt’s first cell split and divided inside a petri dish. Then he was placed in the womb of a cow, where he continued the miraculous journey from embryo to fetus to baby. He is a boy now, but most consider him a monster—except for El Patrón. El Patrón loves Matt as he loves himself, because Matt is himself.

As Matt struggles to understand his existence, he is threatened by a sinister cast of characters, including El Patrón’s power-hungry family, and he is surrounded by a dangerous army of bodyguards. Escape is the only chance Matt has to survive. But escape from the Alacrán Estate is no guarantee of freedom, because Matt is marked by his difference in ways he doesn’t even suspect.

Nancy Farmer has written three Newbery Honor books: The Ear, the Eye and the Arm; A Girl Named Disaster; and The House of the Scorpion, which also won the National Book Award and the Printz Honor. Other books include The Lord of Opium, The Sea of Trolls, The Land of the Silver Apples, The Islands of the Blessed, Do You Know Me, The Warm Place, and three picture books for young children. She grew up on the Arizona-Mexico border and now lives with her family in the Chiricahua Mountains of Arizona.

* “Readers will be hooked from the first page.”


* "An inspiring tale of friendship, survival, hope, and transcendence."

* “This is a powerful, ultimately hopeful story that builds on today's sociopolitical, ethical, and scientific issues and prognosticates a compelling picture of what the future could bring. All of these serious issues are held together by a remarkable coming-of-age story.”

“A story rich in twists and tangles, heroes and heroines, villages and dupes, and often dazzlingly beautiful descriptive prose.”