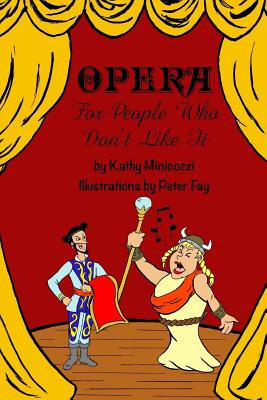 By Kathy Minicozzi
$14.99
OUT OF STOCK - Please Allow Extra Time

Opera might be one of the greatest of the performing arts, but it is also inherently funny. Who is more qualified to find the humor in opera than someone who has sung it for many years? Kathy Minicozzi strips away the boring, stuffy dignity and false glamour that people have imposed on opera for centuries and, like someone poking innocent fun at a good friend, spews plenty of knee-slapping, eye-watering hilarity. In between the laughs, the author manages to drop real information, not only about opera itself but about the lives of the singers who perform it.

Kathy Minicozzi was born on Long Island, New York and raised in the Yakima Valley, Washington State. She earned a Bachelor of Arts in Music from Eastern Washington University and a Master of Arts in Music from Washington State University. As an opera singer, she sang with the Regensburg Stadttheater in Regensburg, Germany, the Israel National Opera in Tel Aviv, Israel, the New York Grand Opera in New York City, Opera of the Hamptons on Long Island, New York, the Ambassadors of Opera and Concert Worldwide and other groups. Although she no longer auditions, she continues to sing as a church soloist and in an occasional concert or recital. She has now taken up a second career as a humor writer, and has been a regular contributor to HumorOutcasts.com.