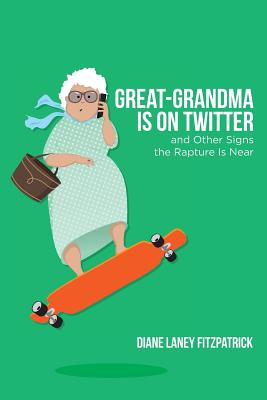 Diane Laney Fitzpatrick makes a living writing about cringeworthy life events most of us would rather forget.

In other words, she gets paid for being a doofus.

Great-Grandma Is on Twitter and Other Signs the Rapture Is Near is an entertaining collection of original work as well as essays from her popular blog Just Humor Me that are as hilarious as they are insightful.

Drawing directly from her own experiences, Diane tells stories of growing up in small-town America during the '60s and '70s, raising children while moving many times all over the country, reluctantly embracing technology, and, of course, the glamorous life of a writer.

Fans of Erma Bombeck and Dave Barry will appreciate self-deprecating chapters such as "Growing Up in the '60s Is Everything You've Heard Plus Better TV Theme Songs," "Give It to Me Straight, Doc," and "Your Opinion Counts, But Not as Much as Mine" that are filled with (mostly) true tales, leaving you laughing along as you recall the one time when pretty much the same thing happened to you.

Diane Laney Fitzpatrick has been sharing funny stories on her blog Just Humor Me for eight years and counting. Originally from Ohio, Fitzpatrick graduated with a degree in journalism from Kent State University and worked as a newspaper reporter and editor before becoming a stay-at-home mom and freelance writer. She is the author of Home Sweet Homes: How Bundt Cakes, Bubble Wrap, and My Accent Helped Me Survive Nine Moves and Great-Grandma Is on Twitter and Other Signs the Rapture Is Near. She currently lives in San Francisco. Visit her online at www.DianeLaneyFitzpatrick.com.