The Secrets We Kept: A novel (Large Print / Paperback) 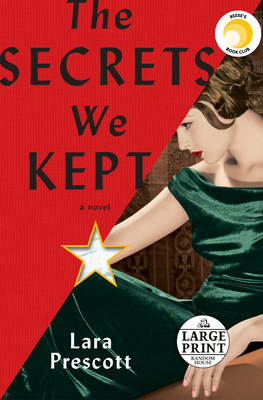 “This perfect historical novel is made of the most alluring ingredients. First, a divine and doomed love affair between Russian author Boris Pasternak and his muse and secretary, Olga Ivinskaya, a woman immortalized in Pasternak’s epic novel Doctor Zhivago, which was banned in Russia for more than 30 years. Second, two American women typists working for CIA and their forbidden love story in the midst of the Cold War and the witch hunt against homosexuals. Lara Prescott brilliantly portrays how a timeless novel like Doctor Zhivago can change course of history. After I finished reading The Secrets We Kept, I pressed the book against my chest, as if I could hear the lovers’ hearts still beating.”
— Aggie Zivaljevic, Kepler's Books, Menlo Park, CA

“A fast-paced and fascinating novel about the women behind the CIA’s plan to use Boris Pasternak’s Dr. Zhivago as a weapon against the Soviet system. The story moves easily from East to West and from the lives of the women who supported and inspired Pasternak to the women who helped get his banned book into Soviet readers’ hands.”
— Margo Grimm Eule, East City Bookshop, Washington, DC

A thrilling tale of secretaries turned spies, of love and duty, and of sacrifice--inspired by the true story of the CIA plot to infiltrate the hearts and minds of Soviet Russia, not with propaganda, but with the greatest love story of the twentieth century: Doctor Zhivago.

At the height of the Cold War, two secretaries are pulled out of the typing pool at the CIA and given the assignment of a lifetime. Their mission: to smuggle Doctor Zhivago out of the USSR, where no one dare publish it, and help Pasternak's magnum opus make its way into print around the world. Glamorous and sophisticated Sally Forrester is a seasoned spy who has honed her gift for deceit all over the world--using her magnetism and charm to pry secrets out of powerful men. Irina is a complete novice, and under Sally's tutelage quickly learns how to blend in, make drops, and invisibly ferry classified documents.

The Secrets We Kept combines a legendary literary love story--the decades-long affair between Pasternak and his mistress and muse, Olga Ivinskaya, who was sent to the Gulag and inspired Zhivago's heroine, Lara--with a narrative about two women empowered to lead lives of extraordinary intrigue and risk. From Pasternak's country estate outside Moscow to the brutalities of the Gulag, from Washington, D.C. to Paris and Milan, The Secrets We Kept captures a watershed moment in the history of literature--told with soaring emotional intensity and captivating historical detail. And at the center of this unforgettable debut is the powerful belief that a piece of art can change the world.

LARA PRESCOTT received her MFA from the Michener Center for Writers at the University of Texas, Austin. She was previously an animal protection advocate and a political campaign operative. Her stories have appeared in The Southern Review, The Hudson Review, Crazyhorse, Day One, and Tin House Flash Fridays. She won the 2016 Crazyhorse Fiction Prize for the first chapter of The Secrets We Kept. She lives in Austin, Texas.

"A gorgeous and romantic feast of a novel anchored by a cast of indelible secretaries."
—The New York Times

"Enthralling... This is the rare page-turner with prose that's as wily as its plot."
—Vogue

"Prescott clearly had fun crafting this story, and the result is a novel that’s a delight to read — and a secret worth sharing."
—San Francisco Chronicle

"The Secrets We Kept is simply sensational. Two gripping narratives unfold in the pressure cooker of the Cold War: passionate, courageous Olga who stands in the shadow of Soviet author Boris Pasternak yet inspires him to write a heroine for the ages, and the cynical, equally-overshadowed women of the CIA who help bring Pasternak's masterpiece Dr. Zhivago to bear as a weapon against Soviet oppression. From the gulags of the USSR to the cherry blossom trees of Washington DC, the story grips and refuses to let go. Lara Prescott is a star in the making."
—Kate Quinn, New York Times Bestselling author of The Huntress and The Alice Network

"A page-turner that is at once a spy thriller, historical fiction and heartfelt romance...A thumping good story."
—The Columbus Dispatch

"A whirlwind of storytelling. In Prescott’s supremely talented hands, the result is no less than endlessly fascinating, often deliciously fun as well as heartbreaking.
The Secrets We Kept is a dazzling, beguiling debut."
—BookPage (starred review)

"Delightful... An intriguing and little-known chapter of literary history is brought to life with brio."
—Kirkus Reviews (starred review)

“A first-rate novel, and it signals the arrival of a major new writer.”
—Bret Anthony Johnston, author of Remember Me Like This

“One of the most unique and devastating novels [I have] read in years.”
—Deb Olin Unferth, author of Minor Robberies