Running Against the Devil: A Plot to Save America from Trump--and Democrats from Themselves (Hardcover) 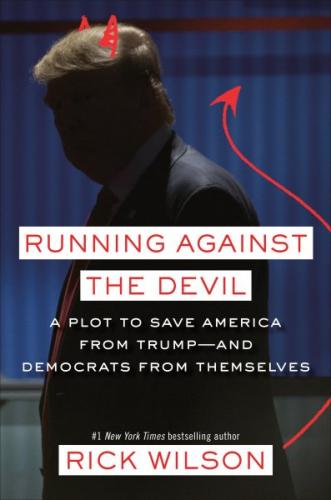 By Rick Wilson
Email or call for price.
Hard to Find - Email or Call for Availability

NEW YORK TIMES BESTSELLER • One of the founders of The Lincoln Project, the bestselling author of Everything Trump Touches Dies is back with a guidebook for beating Trump’s tricks, traps, and tweets in 2020.

“If you believe America’s future depends on Donald Trump’s political machine being crushed at the polls next year, then Rick Wilson’s Running Against the Devil is a must-read.”—Joe Scarborough, MSNBC

Donald Trump is exactly the disaster we feared for America. Hated by a majority of Americans, Trump’s administration is rocked by daily scandals, and he’s embarrassed us at home and abroad.

Wrong. As 2016 proved, Trump can’t win, but the Democrats can sure as hell lose. Only one thing can save Trump, and that’s a Democratic candidate who runs the race Trump wants them to run instead of the campaign they must run to win in 2020.

Wilson combines decades of national political experience and insight in his take-no-prisoners analysis, hammering Trump’s destructive and dangerous first term in a case-by-case takedown of the worst president in history and describing the terrifying prospect of four more years of Trump.

Like no one else can, Wilson blows the lid off Trump’s 2020 Republican war machine, showing the exact strategies and tactics they’ll use against the Democratic nominee . . . and how the Democrats can avoid the catastrophe waiting for them if they fall into Trump’s trap.

Running Against the Devil is sharply funny, brutally honest, and infused with Wilson’s biting commentary. It’s a vital indictment of Trump, a no-nonsense, no-holds-barred road map to saving America, and the guide to making Donald Trump a one-term president.

The stakes are too high to do anything less.

Rick Wilson is a renowned Republican political strategist, writer, speaker, commentator, ad-maker, and a founder of the Lincoln Project. He is the author of the #1 New York Times bestseller Everything Trump Touches Dies. His award-winning column with The Daily Beast is a must-read in the political community. Wilson also writes for The Washington Post, Politico, Rolling Stone, the New York Daily News, The Hill, The Bulwark, and The Spectator. He regularly brings his unique insights to CNN, MSNBC, and NPR. He’s a frequent guest on Real Time with Bill Maher. Wilson lives in Tallahassee, Florida, with his wife, four dogs, and a nameless cat. They have two grown children.

“Rick Wilson is one of the best political strategists of our times. He knows the calculus of how to win better than a mathematician. This book is going to give some old-school Democrats a little heartburn. But if we want to win in 2020, Wilson’s analysis is a full stop. Period. Read and get to work.”—Donna Brazile, former interim chair, Democratic National Committee

“‘Florida Man Chooses Country Over Party!’ It appears that the Democratic Party’s 2020 election briefing book has been written by a lifelong Republican strategist, and you’re looking at it.”—Brian Williams, MSNBC

“No one understands the nature of Trumpism better than Rick Wilson. He also knows how the Democrats can blow this election. This may be a hard book for some of them to read, but it is a message they absolutely need to hear if they want to beat Donald Trump. In this passionate, witty, insightful, and often hilarious book, Wilson brings tough love and sharp elbows to his urgent warning about the difficulty of defeating a man with no bottom, no shame, and no limits.”—Charles Sykes, author of How the Right Lost Its Mind

“Wilson brilliantly explains how Democrats could lose to Trump’s ‘racist and blisteringly stupid’ campaign message yet again unless they change course now. Drawing upon Wilson’s insights, Americans can take back their government and send the reality-TV host back to Mar-a-Lago once and for all.”—Joe Scarborough, MSNBC

“Readers who enjoyed [Rick] Wilson’s first book, Everything Trump Touches Dies, will be pleased to know that he is in hilarious form. [The] manuscript is packed with the same punchy, straight-to-the-jugular humour that has made him a sought-after television guest and columnist in the Trump era. . . . It’s a step-by-step guidebook to defeating Donald Trump, written by ‘a Republican who knows how and why the Democrats often lose big elections they should win.’ And Wilson explains it all. Chapter by chapter, he debunks the myths, wishes, and pipe dreams which have led previous Democratic presidential nominees down the garden path to the runner-up’s position. . . . Any Democrat looking to beat Donald Trump—or really, any Democrat looking to beat any Republican—or anyone who enjoys reading and learning more about how politics really works would do well to crack the spine of Wilson’s sophomore effort.” —The Independent

“Running Against the Devil is pugnacious and profane . . . blunt and funny . . . relentlessly irreverent and breathtakingly brutal.” —The Guardian