Walden, Or, Life in the Woods (Paperback) 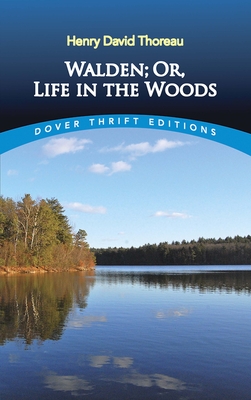 Nature was a form of religion for naturalist, essayist, and early environmentalist Henry David Thoreau (1817-62). In communing with the natural world, he wished to live deliberately, to front only the essential facts of life, and ... learn what it had to teach. Toward that end Thoreau built a cabin in the spring of 1845 on the shores of Walden Pond -- on land owned by Ralph Waldo Emerson -- outside Concord, Massachusetts. There he observed nature, farmed, built fences, surveyed, and wrote in his journal.
One product of his two-year sojourn was this book -- a great classic of American letters. Interwoven with accounts of Thoreau's daily life (he received visitors and almost daily walked into Concord) are mediations on human existence, society, government, and other topics, expressed with wisdom and beauty of style.
Walden offers abundant evidence of Thoreau's ability to begin with observations on a mundane incident or the minutiae of nature and then develop these observations into profound ruminations on the most fundamental human concerns. Credited with influencing Tolstoy, Gandhi, and other thinkers, the volume remains a masterpiece of philosophical reflection.
A selection of the Common Core State Standards Initiative.

Essayist, poet, and philosopher, Henry David Thoreau (1817-62) ranks among America's foremost nature writers. The Concord, Massachusetts native spent most of his life observing the natural world of New England, and his thoughts on leading a simple, independent life are captured in his best-known work, Walden.