The Paris Wife: A Novel (CD-Audio) 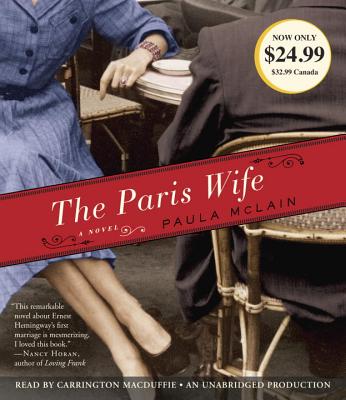 By Paula McLain, Carrington MacDuffie (Read by)
$24.99
Email or call for price.

A deeply evocative story of ambition and betrayal, The Paris Wife captures a remarkable period of time and a love affair between two unforgettable people: Ernest Hemingway and his wife Hadley.

Chicago, 1920: Hadley Richardson is a quiet twenty-eight-year-old who has all but given up on love and happiness—until she meets Ernest Hemingway and her life changes forever. Following a whirlwind courtship and wedding, the pair set sail for Paris, where they become the golden couple in a lively and volatile group—the fabled “Lost Generation”—that includes Gertrude Stein, Ezra Pound, and F. Scott and Zelda Fitzgerald.

Though deeply in love, the Hemingways are ill prepared for the hard-drinking and fast-living life of Jazz Age Paris, which hardly values traditional notions of family and monogamy. Surrounded by beautiful women and competing egos, Ernest struggles to find the voice that will earn him a place in history, pouring all the richness and intensity of his life with Hadley and their circle of friends into the novel that will become The Sun Also Rises. Hadley, meanwhile, strives to hold on to her sense of self as the demands of life with Ernest grow costly and her roles as wife, friend, and muse become more challenging. Despite their extraordinary bond, they eventually find themselves facing the ultimate crisis of their marriage—a deception that will lead to the unraveling of everything they’ve fought so hard for.

A heartbreaking portrayal of love and torn loyalty, The Paris Wife is all the more poignant because we know that, in the end, Hemingway wrote that he would rather have died than fallen in love with anyone but Hadley.

Paula McLain is the New York Times bestselling author of the novels Love and Ruin, Circling the Sun, The Paris Wife, and A Ticket to Ride, the memoir Like Family: Growing Up in Other People’s Houses, and two collections of poetry. Her writing has appeared in The New York Times, Good Housekeeping, O: The Oprah Magazine, Town & Country, The Guardian, The Huffington Post, and elsewhere. She lives in Ohio with her family.

“By making the ordinary come to life, McLain has written a beautiful portrait of being in Paris in the glittering 1920s — as a wife and one's own woman.... McLain's vivid, clear-voiced novel is a conjecture, an act of imaginary autobiography on the part of the author. Yet her biographical and geographical research is so deep, and her empathy for the real Hadley Richardson so forthright (without being intrusively femme partisan), that the account reads as very real indeed.” —Entertainment Weekly

“Lyrical and exhilarating . . . McLain offers a raw and fresh look at the prolific Hemingway. In this mesmerizing and helluva-good-time novel, McLain inhabits Richardson’s voice and guides us from Chicago—Richardson and Hemingway’s initial stomping ground—to the place where their life together really begins: Paris.” —Elle